Tucker got personal. It was SAVAGE.

His ‘made me want to vomit’ anti-veteran tweet is not the FIRST time this pompous windbag has made the news earlier.

You may remember there was a White Genocide tweet from last Christmas Eve by a White Professor? 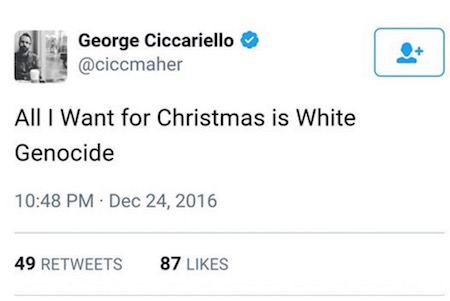 Pick any OTHER ethnic background at random — or people group of any sort, really … gender, religion, sexual preference, disability — and it would be perfectly fine, too. Say it’s satire and it becomes socially appropriate to long for murders on a massive scale.

Some guy gave up his first class seat for a uniformed soldier. People are thanking him. I’m trying not to vomit or yell about Mosul.

So Tucker Carleson booked him as a guest.

The Professor tried to stay smug and condescending. But Tucker called him out again and again.

Called him out on his facts.

Called him out on his privileged (government-subsidized position).

Called him out on his pseudo-intellectualism. (Watch him quote the professor’s writing, call it ‘childlike’ and then explain to him WHY it was childlike.)

Either the Professor doesn’t understand his topic, or he is being deliberately vague.

Called the professor a ‘performance artist’ not a ‘scholar’.

The Professor’s reply to that? Here he claims that performance art IS scholarship? Will leave you shaking your head.

He might have tenure… but if he keeps this up, and students stop spending their money there, tenure won’t help him.

As for his praise of Venezuela? He might want to check in on how they’re doing lately. Even SOCIALISTS are calling Venezuela a ‘failed state’.

If his Twitter feed hadn’t gone dark, we could look in on his history and see whether this joker had ever praised Obama’s foreign policy, seeing as Obama set the record for most days in office during wartime.