Which is worse, the crime itself, or the way everyone walks on eggshells concerning who was responsible?

As we go into the story, and how everyone tiptoes around it, remember how it was FIRST reported:

A cruel murder shocked Brandenburg. Retiree Gerda K. († 82) was attacked in her apartment and tortured to death.

Before we get into any excuses, or deflections, remember that we’re talking about an 82 year old. Someone who had SURVIVED as a child living under the Third Reich, and the hard-fought march of the Allies into Berlin.

She survived a Divided Germany, watched the Berlin Wall Go up … and come down again. She may, perhaps, have struggled under the Soviet rule in East Germany.

But she made it to the Brave New World of Angela Merkel’s Twenty-First utopian century. In which she was slaughtered.

This why people keep posting THIS picture: 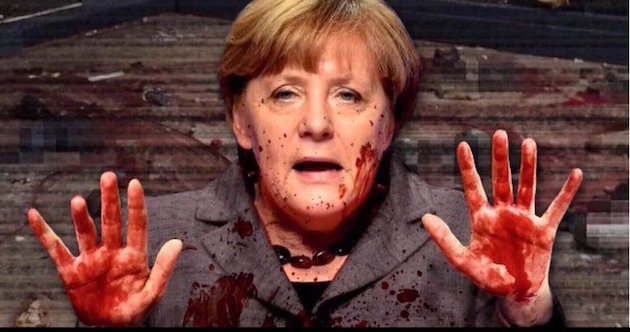 She really DOES have blood on her hands.

Which is a nice segue to the latest news report about this lady’s murder.

A suspect has been arrested for murder.

According to the investigators, the suspect is a “juvenile Syrian national”, who had come to Germany in 2015 accompanied by a guardian. The prosecution did not tell the exact age.

Well, the ‘exact age’ bit is interesting, since there have been a number of ‘refugees’ that have falsely claimed to be children, as this article attests:
Two-thirds of refugee ‘children’ ARE ADULTS figures show

Could it be that the ‘juvenile’ isn’t quite so ‘juvenile’?

How did authorities react?

The wording is a little rough (using Google Translate from the original language), but it came out like this:

“We know the origin of the alleged perpetrator will arouse emotions,” it said. In the joy of the investigation, the concern is mingled “that now all foreigners living in Cottbus are under general condemnation,” the city said.

So the concerns are not for any emerging trends of violence specific to a particular demographic, and what can be done to reduce it, but about the EMOTIONAL response of the citizens who are forced to LIVE in this unpleasant new reality.