Not a question your average American would need to answer. But in Brazil, this couple did.

A Brazilian couple whose wedding day was shattered after a hitman walked in and opened fire on guests have told why they decided to go ahead with the ceremony.

Jailton Barbosa, 25, and his 18-year-old bride Christina said they were ‘trying to make the best of a bad deal’ after gunman Humberto Ferreira Santos, 52, wounded three people as they were preparing to walk down the aisle earlier this year.

The pair say they do not regret pushing on with their vows, but were upset when around half of their guests failed to show up at the wedding party because ‘so much food was wasted.’ …

…Mr Barbosa was standing just inches from the victims when the attack took place while Christina was outside the church, awaiting her big entrance.

Mr Barbosa, a businessman, said: ‘In just a few terrible minutes, our lives were turned upside down by a madman who tried to murder our relatives in front of us.

‘When the gunman opened fire, it was one of the most frightening and chaotic moments in our lives.

‘My mind went into a whirl. I couldn’t get my head around what had just happened.

‘I remember hearing the shots, grabbing hold of my mum and pulling her into a room and then rushing over to help those who were injured.’

Cristina was hurried back into the bridal car and locked in for her safety.

After the attack, Santos turned on his heels and walked away, leaving a scene of devastation behind him.
Mr Barbosa added: ‘I ran and cradled my uncle in my arms. He had been shot several times and I kept talking to him and trying to comfort him.

‘I helped him out of the church into a car and he was rushed to hospital. I did the same for my cousin and his wife who had been grazed on her arm by a bullet.’
Read more: Daily Mail 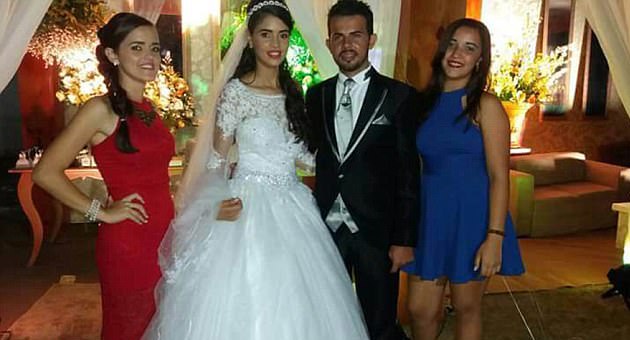 So… they were upset when half of the guests didn’t show up for the reception?

Not to quibble, or anything… But they JUST WATCHED SOMEONE GET ASSASSINATED!

Sorry, Jailton if their no-show offended you. But remember two things.

a) They didn’t know if the assassin had killed everyone he was looking for.

b) Witnessing an assassination tends to dampen the festive spirit.