What you celebrate says a lot about you. It’s true of Trump, and was True of Obama. 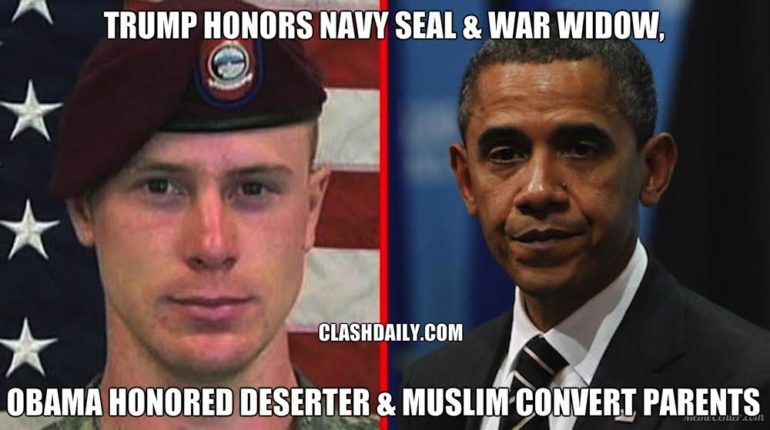 Trump left many of his critics slack-jawed at his Presidential Address to Congress.

When he stood and gave tribute to both Ryan Owens and his lovely wife who was understandably overcome with emotion, something special happened.

Van Jones — no fan of Trump — said it this way:

"He became President of the United States in that moment, period" @VanJones68 on @POTUS honoring Navy Seal widow https://t.co/uZtnj0OLgs

So it’s clear that the men and women in uniform — and their sacrifice — hold a special place in Trump’s esteem.

Whatever we may say of his failings, we have seen something similar in Dubya’s love and appreciation of those who have served. After awarding the Purple Heart to a soldier in hospital that hadn’t yet regained consciousness from his injuries, an observer reported what happened when his eyes opened, and Dubya hurred to his bedside:

So we stood silently as the military aide presented the Marine with the medal for a second time. The president had tears dripping from his eyes onto the Marine’s face. As the presentation ended, the president rested his forehead on the Marine’s for a moment. Now everyone was crying, and for so many reasons: the sacrifice, the pain and suffering, the love of country, the belief in the mission and the witnessing of a relationship between a soldier and his commander in chief that the rest of us could never fully grasp.

And Obama seemed to show his preference for a DIFFERENT kind of American.

There were untold numbers of prison parolees — dangerous and otherwise — released.

There was Bradly ‘Chelsea’ Manning, whose sentence was shortened by Obama.

And then there’s Bergdahl.

The Deserter who endangered the lives of those who went looking for him. And he converted to Islam.

And his dad tweeted this:

Just recently, reports surfaced of a tweet deleted from Bob Bergdahl’s Twitter account that directly addressed a Taliban spokesman. “I am still working to free all Guantanamo prisoners,” it read. “God will repay for the death of every Afghan child, ameen.”