Senator Diane Feinstein (D-CA) was TRYING to give Judge Neil Gorsuch a hard time, but it didn’t go well — for Feinstein.

Granted, it’s not so hard to make Diane Feinstein look like a damn fool.

After all, she’s been doing it in the Senate for a quarter of a century now.

The Democrat Senator wanted to make sure that Gorsuch would find in favor of the ‘little guy’ against the big, bad business.

Because it’s important for the Dems to ensure the right kind of bias in a Supreme Court Justice.

You wouldn’t want someone who actually looks at the facts of each case individually and rule that way.

Judge Gorsuch was ready for her questions and had the most amazing response.

He made her look like a fool and did it with such class and finesse that she didn’t even know what happened.

That moment when Gorsuch says that his 10 1/2 years on the bench included over 2,700 opinions and the 2 that were mentioned that show his ‘Big Business Bias’ don’t reflect his body of work. Gorsuch then rattles off a dozen or so where he ruled against the ‘big guy’ in favor of the ‘little guy’.

Feinstein was owned, didn’t know it and practically thanked Gorsuch for the experience.

Sen. Diane ‘Clueless’ Feinstein didn’t even understand that her question was dufus-y, so she re-tweeted the above tweet: 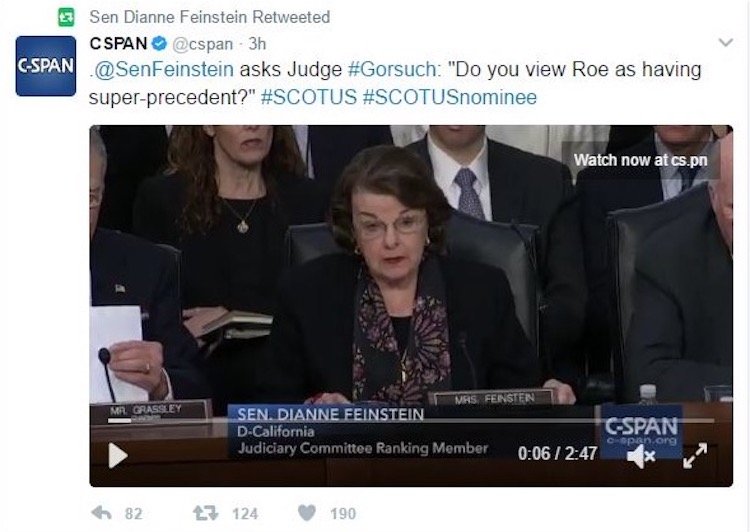 Exactly WTF is a ‘super precedent’?

It’s just another made-up term from the Left like the ‘gender-neutral pronouns’, ‘intersectional feminism’ and ‘white privilege’.

Oh FFS @SenFeinstein the whole point is that Gorsuch isn’t “for” anyone – not the corporations nor little guy. He’s “for” the Constitution

@cspan @SenFeinstein to Gorsuch: Abortion is “Super-duper precedent” but Freedom to Exercise Religion & Right to Bear Arms must be curtailed

@cspan Who told her to say super precedent? Her staffers and handlers may be the worst in DC

@cspan @SenFeinstein super precedent? Is that a legal term? This woman is in way over her head

@JudiciaryDems @SenFeinstein He obliterated you with poise, candor and an even disposition. Lady, stop loving your power and retire.

WTF is a SUPER-precedent!? Gorsuch makes Dianne Feinstein look like a twit over Roe v Wade

Well, if Neil Gorsuch is half as good on the bench as he was making Sen. Feinstein look like a complete tool, he’s going to be freaking AMAZING!