The Media (D) has been giddy reporting ‘White Supremacist’ hate crimes since President Trump was elected. There’s just one problem, though — the crimes are hoaxes.

ClashDaily has reported on many of these Fake News stories:

An attempt to burn an east Charlotte store that included a note warning of plans to “torture” immigrants is being investigated as a hate crime by Charlotte-Mecklenburg Police.

Police say officers were called at 9:59 p.m. Thursday to a fire at the Central Market, a Nepali Indian store at 5718 Albemarle Road in Charlotte. On arrival, officers were advised by the Charlotte Fire Department that the fire was contained to the front door and burned itself out by their arrival.

Investigators say one of the windows in the door had been broken out with a rock and a note was left near the door. The note stated “the suspect did not want any refugee business owners and that they would torture the owner if they did not leave and go back to where they came from,” according to police.

It was signed “White America.”
Read more: The Charlotte Observer

Here is the note, with full text — errors and all — following: 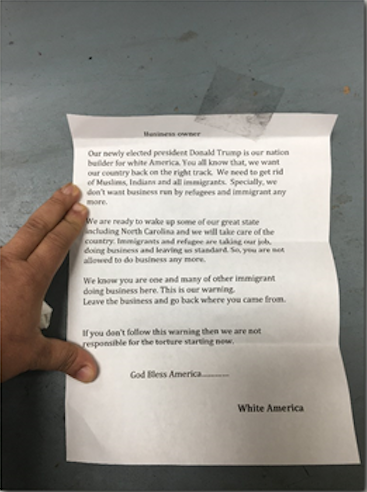 Our newly elected president Donald Trump is our nation builder for white America. You all know that, we want out country back on the right track. We need to get rid of Muslims, Indians and all immigrants. Specially, we don’t want business run by refugees and immigrant any more.

We are ready to wake up some of our great state including North Carolina and we will take care of the country. Immigrants and refugee are taking our job, doing our business and leaving us standard. So, you are not allowed to do business any more.

We know you are one and many of other immigrant doing business here. This is our warning. Leave the business and go back where you came from.

If you don’t follow this warning then we are not responsible for the torture starting now.

It was quickly called a ‘hate crime’ committed by ‘white supremacists’ by the Media (D) and all over social media.

Which is funny, since every time there is a terrorist attack, we have to ‘wait until all the information is in’ before we can confirm the guy shouting ‘Allahu Ackbar’ is indeed an Islamic Terrorist.

But here’s the surveillance footage:

EXCLUSIVE: Surveillance video from last night’s hate crime and arson in east Charlotte. I’ll show you video of the fire at 5 on @wsoctv pic.twitter.com/bPgxw2ovNE

That bro doesn’t look white to me.

This guy smashed the windows, attempted to set fire to the business and left a racially charged note that blamed ‘White People’. He even referenced President Trump.

What could his motivation have been?

It couldn’t have been to make white people look racist, could it?

Because that would be racist, wouldn’t it?

Here’s the problem, Media (D): When you label everything a ‘hate crime’ perpetrated by a ‘white supremacist’, it’s makes it hard to believe that something actually is racism.

If there were real examples of these ‘hate crimes’ happening, you’ll be shouting to deaf ears.