This time, it was Clara Jeffrey, the Editor of the shockingly popular, wildly crazy left-wing rag Mother Jones.

If you haven’t come across the self-proclaimed ‘leading independent news organization‘, check out today’s homepage: 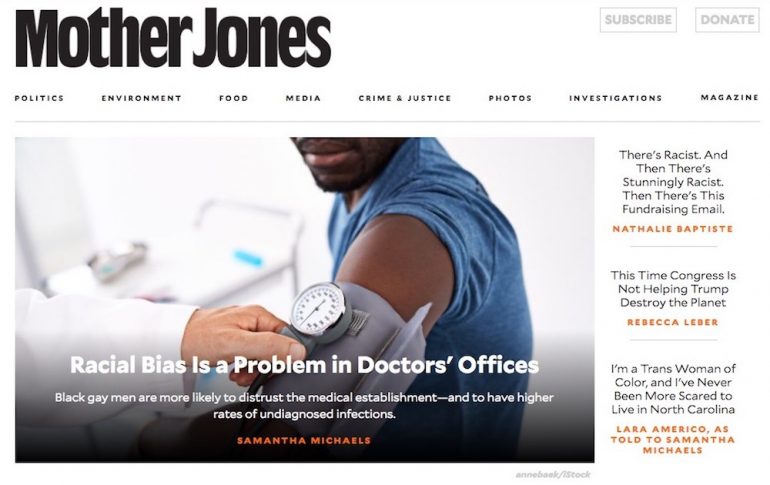 In case you can’t read those headlines:

Racial Bias Is a Problem in Doctors’ Offices

This Time Congress Is Not Helping Trump Destroy the Planet

I’m a Trans Woman of Color, and I’ve Never Been More Scared to Live in North Carolina

Yes, Mother Jones is just a bunch of Leftist ‘Fake News’ stories that slip right past the ‘Fake News’ Fact-checkers.

The tweet by Jeffrey follows the same vein as the other stories on Mother Jones — asinine mixed with outrage.

She thinks that calling the US missiles ‘Tomahawks’ makes Native Americans angry.

I thought it was being called ‘Native Americans’ instead of ‘Indigenous Peoples’, but I can’t seem to keep up to date on the current politically correct terms.

Well, whatever the term is, Jeffrey shouldn’t have said anything as a white person.

I’m pretty sure she’d be upset if a biological man — who doesn’t have a uterus — spoke about ‘curtailing’ her ‘reproductive rights’.

Twitter users were as outraged with her tweet as Jeffrey was about the weapon nomenclature on behalf of the Native American community.

‘That the missiles are called tomahawks must enrage a lot of Native Americans [sic],’ she tweeted on Saturday.

Utilizing the names of Native American tribes is a common practice among the US military, which has drawn inspiration from countless tribes for machinery and aircraft over the years.

Jeffery’s critics argue that her perceived hypervigilance for a culture that isn’t her own is ill-informed, and that her concerns are misplaced…

…Some users argued that Jeffery, being a white woman, did not have the authority to speak on issues that didn’t affect her racially.
Read more: Daily Mail

The best tweet, however, was retweeted by Donald Trump Jr.:

In one tweet, Ben Shapiro shows how ridiculous Jeffrey is with her ‘outrage’.

Jeffrey is another one of those pussified liberals that runs a pussified magazine filled with outrage and hate guised as ‘tolerance’.

What she really needs is this: