In case you weren’t sure what they thought of us… they made it clear.

Harvard will change the final lyric to its almost two-century old alma mater because it’s no longer ‘inclusive’, according to university officials.

The ‘Fair Harvard’ anthem has been used at university commencements and other major events since it was written in 1836, but now the university is changing its tune.

Plans were announced on Wednesday by the Presidential Task Force on Inclusion and Belonging, an initiative launched in September by Harvard President Drew Faust, for a competition to change the anthem’s last line ’till the stock of the Puritans die’ in order to reflect inclusiveness.

…The anthem’s theme is the commitment to the pursuit of truth, said Allen, and the final line makes the claim that that goal is only achievable to a specific ethnic group.

‘The last few lines of the final verse do a wonderful job of connecting the student journey to the school’s mission,’ said Allen. ‘But in fact, the pursuit of truth is for everybody.’ —DailyMail

Ethnic purity, huh? So ignorant (or dismissive?) of their own history that they think that line is about race?

Harvard was not founded by people trying to achieve racial purity, dumbasses. They were compelled to worship according to the laws of the land (on pains of imprisonment or death) and their own consciences convicted them that they were to worship another way.

The people they were fleeing? Look it up. The ‘oppressors’ (to use language you can understand) were EXACTLY the same race as the ‘oppressed’.

Not EVERYTHING is about race. Can you get that through your heads, you ridiculous race-baiting gits!

And when they came to the new world, those who came here set up centers of learning. Harvard. Princeton. Yale. Among others.

The fact we even HAVE an Ivy League is because religious groups were founding schools. They were Seminaries, most of them. Here’s a chart. 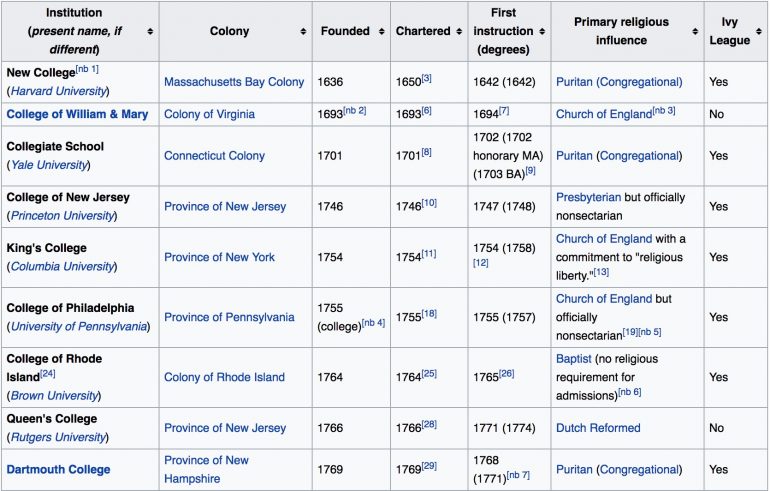 Imagine if it were some group Besides Christians that founded these schools.

Imagine how different this story would be if these schools were founded by, say, freed slaves, or Chinese Immigrants. Or Aboriginals. Would we be erasing their history and foundation?

No, if we did, there would be riots.

Erasing the history? Hell no, they’d be shouting it from the rooftops.

They’re like kids who run off to the big city, get rich and are embarrassed by their working class parents who scrimped, saved and sacrificed to put them through school in the first place.

Ingratitude is ugly wherever you find it. Whether it’s in punk kids or Institutions that give the finger to the people and ideas upon whose shoulders they stand.

Ingratitude. That’s for wussies. Don’t be one.

Here’s a book will tell you how AND why: