Have you noticed that so many Leftist protesters cover their faces? ClashDaily has discovered why… 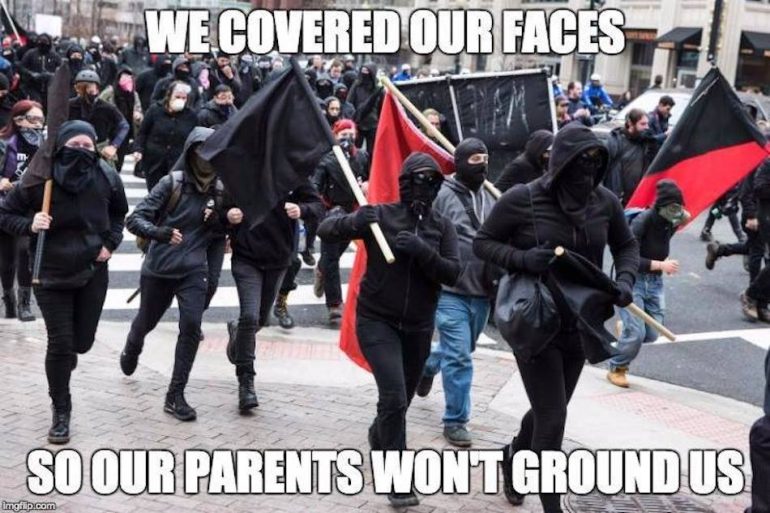 The violent, destructive Antifa movement is notorious for wearing all black and covering their faces.

It’s not just to protect themselves from tear gas when things inevitably get out of hand and riot police need to step in, it’s also to make sure they don’t get grounded when they go back to their parents’ basement.

These are the fascists that — in the name of ‘anti-fascism’ — demand that everyone else conforms to their worldview, and if you don’t… they’ll smash and loot a Starbucks. (It’s always a Starbucks, for some reason.)

Seriously, though, the wearing all black is actually a tactic. It’s called ‘Black Bloc’ and has been used by protesters for decades. It’s to make all protesters look like a unified group protesting the whatever-it-is. It also prevents them being easily identified by authorities.

Black Bloc tactics have become a staple in anti-Trump and anti-free speech protests.

…While I can understand that black bloc is a tactic that is sometimes needed and even helpful in protests to protect and defend against imminent threats of violence, I disagree that “power is faceless” and that white people wearing masks “brings unity”. Power in the United States is rooted in privilege and by wearing masks, white protesters are potentially failing to acknowledge their privilege as white people in this society. Moreover, by wearing masks in a black bloc in the Trump era, white activists are also failing to comprehend the impact their actions might have on communities of color, immigrant communities, Muslim communities and other targeted communities in the U.S….

…I was on my way to a Milo Yiannopoulos protest to see if I could support the legal observer team, when I ran into a large group of white people with masks and sticks thundering up 40th Street. As a transgender, latinx activist, the sight of the oncoming throng of white people in masks, many with shaved heads and sticks, made my heart stop. Were they a white power group coming to support Milo or were they an anti-racist, black bloc heading to protest Milo? I could not tell…

…The problem that I see with the black bloc tactic for the current Trump era is that the white activists participating in black bloc appear to have little connection to and solidarity experience with marginalized and targeted communities.
Read more: Golden Gate Xpress

Protesters wearing all black so the police can’t arrest them is racist.

The Left is so screwed.

…or you get grounded by your parents.