Imagine learning this after being the sucker who wrote a REAL essay and got rejected!

Between this and the Singer story, it’s pretty clear that our ‘prestigious’ universities are NOT what they used to be!

Higher learning is NOT supposed to mean that admissions directors are stoned — or acting like it.

You know the drill. You want into that big-name university. So does everyone else. It’s a competition. So you submit an answer to an essay question to thin the ranks of the applicants.

Stanford’s essay question was open-ended. What matters to you and why?

I submitted this answer in my @Stanford application, & yesterday, I was admitted…#BlackLivesMatter pic.twitter.com/R5YxM77bWL

The April first date made it sound like a joke, didn’t it?

That and the response. Sadly, Stanford has confirmed it.

The 18-year-old said he wanted his progressive bona fides to come across in his essay.
“My unapologetic progressivism is a central part of my identity, and I wanted that to be represented adequately in my application,” he said.
Stanford probably got the message loud and clear.
Mr. Ahmed was recognized as a Muslim-American change-maker by former President Barack Obama at the 2015 White House Iftar Dinner.
He also spearheaded Martin O’Malley’s youth presidential campaign and then interned and worked for Democratic nominee Hillary Clinton’s White House run. —Washington Times

Looky who his ‘role model’ is:

Happy birthday to my role model, @lsarsour! As an American-Muslim youth today, she inspires/empowers me through her advocacy. Grateful. pic.twitter.com/u1YdU3tlyt

He admires her advocacy?

You mean her anti-Israel bigotry?

Or her support for Hamas?

Maybe it’s the statement that she’d like to ‘take away the vaginas’ of Brigitte Gabriel and Ayaan Hirsi Ali.

Oh, supported Clinton AND he’s a Muslim Activist? Is a Muslim even ALLOWED to say ‘BLM’ is more important to him than Allah? Oh right — Taqiyya. Nope. He’s ok.

Next, we’ll be hearing about his scholarship offers.

The essay said what matters… and why. How were WE supposed to know the correct answer was to regurgitate a leftist bumper sticker. 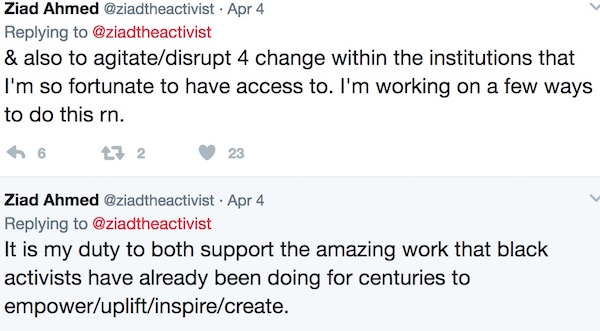 Will #NotMyPresident #I’mWithHer and #Resistance be in the same classes?

And we can expect the #MAGA applicant has yet to receive their reply.

Stanford. You’re a bunch of wussies. And you’ll be creating students just like yourselves. You need to put THIS on your reading list. STAT!