The long knives are still out at Fox… what will become of the Network when the dust finally settles?

It can’t POSSIBLY be a coincidence that all this is happening right after Trump got elected, can it?

The one network that permitted positive coverage of President Trump, where heads are suddenly rolling?

The media (D) have been laying the ‘fake news’ narrative on pretty thick. Ironically, they themselves, have been so often caught with their pants down supporting bogus stories.

But that won’t matter if the public “buys in” to the story as THEY tell it. And they are trying their hardest to pitch it.

And now, rightly or wrongly, Fox’s accusers have claimed another scalp.

Sean Hannity tried to stand up for the guy who Sean calls innocent … but to no avail. 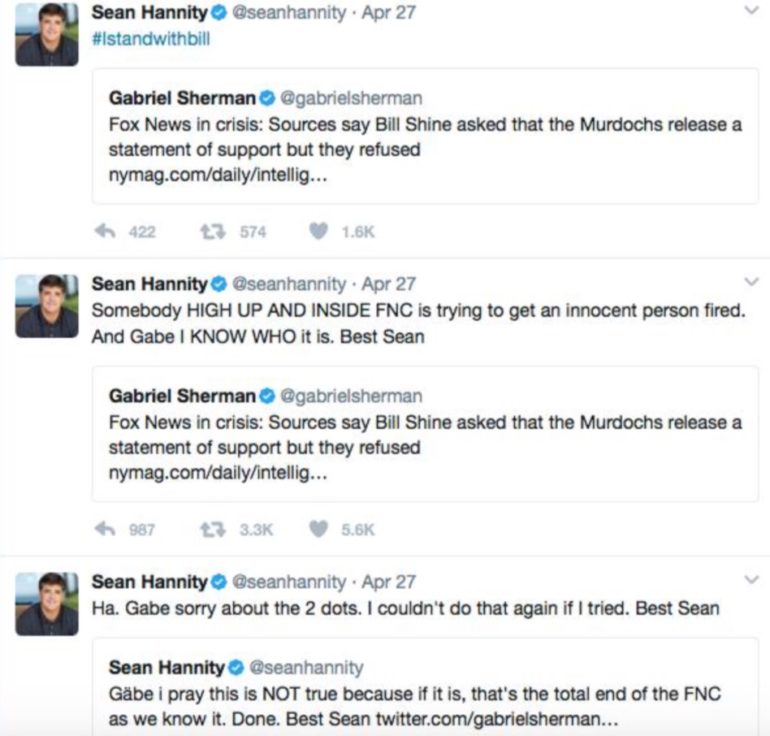 Shine has been named in a number of lawsuits alleging sexual misconduct at the company, and was blamed for not doing more to prevent it.

Last month, Julie Roginsky, a Democratic political consultant and Fox News contributor, sued the network and Ailes, accusing them of denying her a permanent hosting job after she rebuffed Ailes’ sexual advances.

She also sued Shine, asserting that he failed to investigate her claims.

Shine and Jack Abernethy were appointed co-presidents in August to lead Fox News in the wake of Ailes’ departure.

The co-president position that Shine held remains open, a Fox spokeswoman said. It is not clear if Fox will fill that position. —Reuters

Was Sean right in his tweet about this spelling the end of Fox?

And if they suddenly care so much about sexual misconduct, what about a Contributor who tilts LEFT? Does HIS misconduct matter too? (ClashDaily asked that question here)

He bragged in his memoir (Exposing Myself) that he slept with over 1000 women. Some of which were apparently interns, or other lower-rung coworkers.

He also tweeted a nearly-naked image of himself.

Does he get a pass because he’s Liberal?

If so, they don’t care so much about ‘integrity’ as they do about settling politcal scores, and “Killing the Competition”.

(If it isn’t already O’Reilly’s book on the topic, maybe it ought to be.)

Either way, the timing and scale of this seems a little … suspect.

But it might open the way for that rival Right-Leaning network we’ve been hearing about.