This teen with attitude is taking her 15 minutes of fame all the way to the bank.

If you don’t know who 14-year old Danielle Bregoli is, you’re luck just ran out.

This teen appeared on Dr. Phil’s show 6 months ago because her mother was fed up with her antics and out-of-control behavior. Bregoli became Internet-famous for her catchphrase, ‘Cash Me Ousside, how bow dah?’

She instantly became a meme. 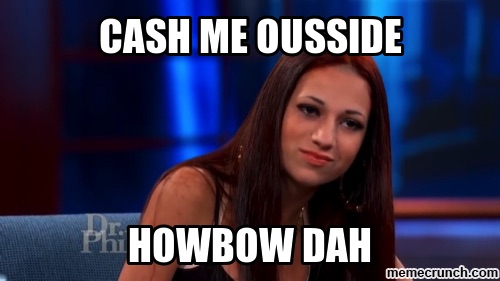 Watch her on Dr. Phil:

Then her follow-up on Dr. Phil after the therapy ranch. She still didn’t lose her attitude:

She’s parlayed her internet fame into a lucrative career, appearing in music videos and making appearances.

Here she is in a hip-hop video flashing cash sitting on a Rolls Royce and wearing her own merch:

Maxim magazine interviewed her. She took a swipe at Dr. Phil, without whom she would still be dodging juvie instead of raking in $40K for an appearance.

Generally known as her catchphrase in place of her actual name, “Cash Me Ousside” has spent the six months since seizing every opportunity her newfound fame has presented, including paid party appearances, reality TV deals, and nine million new social media friends.

She even starred in a rap video, flashing her cash on top of a Rolls-Royce. Fitting, because chances are she’ll be a millionaire by the end of this year.

Do you have plans to go back on Dr. Phil ever again?

Hell no. Ain’t nobody have time for that bald headed bitch. I just saw him on Jimmy Fallon talking all sorts of mess about my mom.

Have you heard from Oprah at all?
No. I don’t think I’m the Oprah type.

What’s the craziest offer or appearance request you’ve received based on your newfound fame?

The guy that made her famous.

This girl — who is a real problem child — is getting offers of 75K to show up at birthday parties and bar mitzvahs overseas?

If you didn’t think that our culture is messed up, just look at this girl.

All those people throwing cash at her need this: