How can they not see how ridiculous they are to the rest of us?

But lately, they seem to be rooted in one thing.

Skeptical? This meme sums up the idea nicely. Citations and sources will follow. 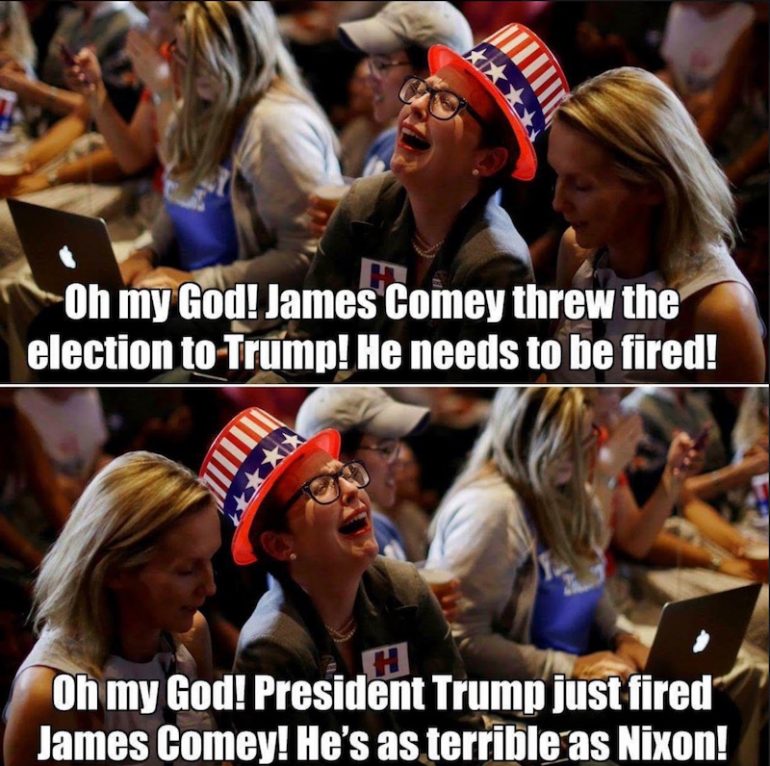 Credit where it’s due, ABC called out the Democrats on exactly that in a great piece.

We’ll provide a few excerpts, but you can follow the link to the entire article if you need MORE proof.

Democrats in Congress are questioning the timing of Donald Trump’s firing of FBI Director James Comey on Tuesday afternoon, and many say they suspect the president may be trying to obstruct the bureau’s investigation into possible collusion between Trump campaign associates and the Russian government.

But less than a year ago, some of the same Democratic politicians who are now attacking Trump for firing Comey called for the director’s resignation or questioned his credibility.

Here are individual quotes used to make the case.

“I do not have confidence in him any longer,” Schumer told Bloomberg on Nov. 2.

“To restore my faith, I am going to have to sit down and talk to him and get an explanation for why he did this,” he added.

“Maybe he’s not in the right job,” she said to CNN on Nov. 2. “I think that we have to just get through this election and just see what the casualties are along the way.”

may have violated “the Hatch Act, which bars FBI officials from using their official authority to influence an election,”

(who no longer believes Comey to be a principled public servant)

Would not be a bad thing for the American people if Comey stepped down.

And that’s not even scratching the surface of all the Dem-friendly pundits, news anchors, and talking heads who pulled out their knives wanting his head in November, who now call him a Martyr in May.

These poor little snowflakes don’t know if they’re coming or going. All they REALLY know is that they HATE HATE HATE not being in power.

They have a choice. Either they are going to embrace their perpetual toddlerhood, or they will shake it off and join the adults.

Which one does the whiny Liberal in YOUR life need?