Could it be that all the beheading ISIS does is merely the group’s attempt to inject laughter into a dour world? To prove that point, recently, on a three-minute Center for Medical Progress video, a Planned Parenthood of Michigan medical director flippantly said that pro-choice proponents should just admit that abortion is murder.

Now, how funny is that?

Medical director, Lisa Harris not only has the courage of her convictions, much like Jihadi John and youthful Mexican assassin, El Ponchis, this is a woman with a great sense of humor.

Then, further along in her slapstick routine, Harris kidded about trying to pull the severed head of an aborted baby out of its mother’s womb. Inserting levity into the abortion process, Harris jested about “The heads that get stuck that we can’t get out…[and] the hemorrhages that we manage.”

In other words, at Planned Parenthood amputated heads and profuse bleeding are fodder for laughing it up? Which proves, once again, that ISIS, abortion advocates, and now pro-choice comedians, are all on the same page when it comes to severed heads.

In addition to telling Jesus to “suck it”, and saying that her Emmy is her God, Kathy appeared in a pro-abortion video with Cher to support the re-election of hilariously-witty-abortion-proponent Barack Obama. Then, in the height of the oh-so-funny #shoutyourabortion craze, Kathy tweeted approbations to a woman who had the courage to brag about relegating her offspring to a red biohazard bag. 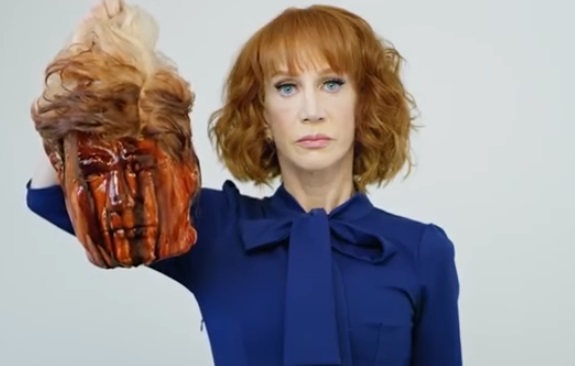 More recently Kathy, who is all about the hilarity of headless corpses, posed for an amusing “Love Trumps Hate” photo with edgy photographer Tyler Shields. In her outstretched arm, the knee-slapping, buttoned-up Kathy held what looked like Donald Trump’s decapitated blood-soaked head.

Griffin’s homage to ISIS included dampening Trump’s blond hair with blood in a color that matched her own carrot-top red. The picture of Kathy is so uproariously funny it is sure to have Griffin-loving/Trump-hating fans absolutely rolling in the aisles.

During the photo shoot it is purported Griffin told Tyler that after the humorous assassination threat against a sitting president was released, to avoid prison, the comedy team might need to move to Mexico, where rib-tickling things like severing heads is a national past time.

And so, despite Kathy Griffin’s hollow apology where she blamed poor judgment on being a comic in search of good material, it’s final; ISIS, Planned Parenthood, and pro-choice comedians all think beheading is giggle-worthy.

With that in mind, although Americans are usually up for a good joke, maybe there is cause for some concern. After all, if ISIS laughs about removing heads for religion reasons, Planned Parenthood for convenience sake, and liberal comedians on behalf of politics, how long will it be before the violent Trump resistance has a good belly laugh at the thought of decapitating anybody who disagrees with them?