BEST. TYPO. EVER. And our reaction to it? Tells us something about Trump.

We’ve always loved a good gaffe… especially when it’s on the other side.

“I’m telling you there’s an enemy that would like to attack America, Americans, again. There just is. That’s the reality of the world. And I wish him [Barack Obama] all the very best.”

“The last time I checked, the Constitution said, ‘of the people, by the people and for the people’. That’s what the Declaration of Independence says.”

“We can’t be so fixed on our desire to preserve the rights of ordinary Americans.” — (Actually, maybe we should have paid attention when he said that one. In 1992)

Or, our favorite, Joe Biden:

Here’s a link. There are too many good ones. Here’s one just to get you started.

A man I’m proud to call my friend. A man who will be the next President of the United States — Barack America!

So, of COURSE, we’re going to have gaffes. In Trump’s case… seeing his love of using Twitter, it’s only a matter of time.

So when Trump’s turn came … it was YUGE! He makes the most BEAUTIFUL gaffes.

Our President INVENTS words for his gaffes!

No writing “Teh” for him! Gaffe BOLDLY! He wrote this:

The internet went wild over it. Some — predicably — mocked him. Others — more creatively, and showing an actual sense of humor — just had some good clean fun with it.

Liberals are crying everywhere about us getting out of the Paris Agreement.

Rest of us are popping open the #covfefe and celebrating ?#MAGA pic.twitter.com/GJcGPYshYO

The next morning, he wrote this:

Who can figure out the true meaning of "covfefe" ??? Enjoy!

At least TRUMP isn’t the typical Washington stuffed shirt! In a world with REAL tyrants who will jail people (or worse) for merely criticizing the Dear Leader… Trump’s getting in on the joke.

And what does all this REALLY mean?

There is such little substance to what he’s really doing wrong that we have the luxury of pouncing on this.

It has the bonus effect of showing exactly what his critics are made of. If they are hammering him over a tweeted gaffe, and ignoring — say — the Kathy Griffin Trump beheading story? (Looking at YOU, CNN and Morning Joe.)

CNN seriously had a 15 minute panel discussion to attack Trump for typing "covfefe".

This is why we call CNN very FAKE NEWS!#Covfefe

That tells you everything you need to know about how desperate they are to find SOME sort of bad news to share about Trump.

Media frantically typing #Covfefe on Google translate to see what it means in Russian. pic.twitter.com/0DubNBvs3C

Yeah. Isn’t that the truth.

And is REALLY their job to dig up bad news about Trump? Is that what the did with the LAST President?

Or is their REAL job to honestly report whatever is newsworthy –whether it’s good, bad or indifferent?

Let’s close with a picture you probably haven’t seen if you’ve been getting your news from the networks. 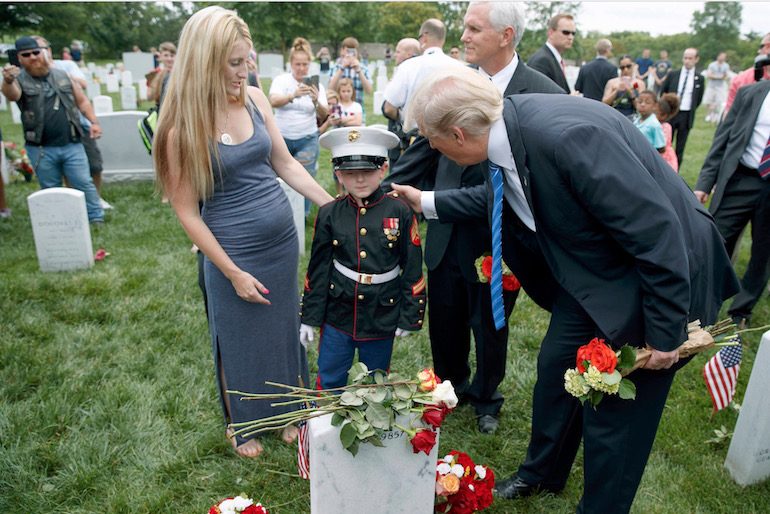