While others weep, lament and try to process what has happened, this guy sprang into ACTION.

You remember ‘action’ don’t you?

It’s what citizens used to do until people started throwing around hashtags like #BringBackOurGirls in empty platitudes and virtue signaling.

Citizens would see a problem, and look for ways that they — personally — could be part of the solution.

Notice how he’s NOT petitioning some government agency to be the solution.

This is a Direct Action solution. If you have trouble understanding the concept, ask your granddad. It’s what society NORMALLY did in such situations until they outlawed testosterone. 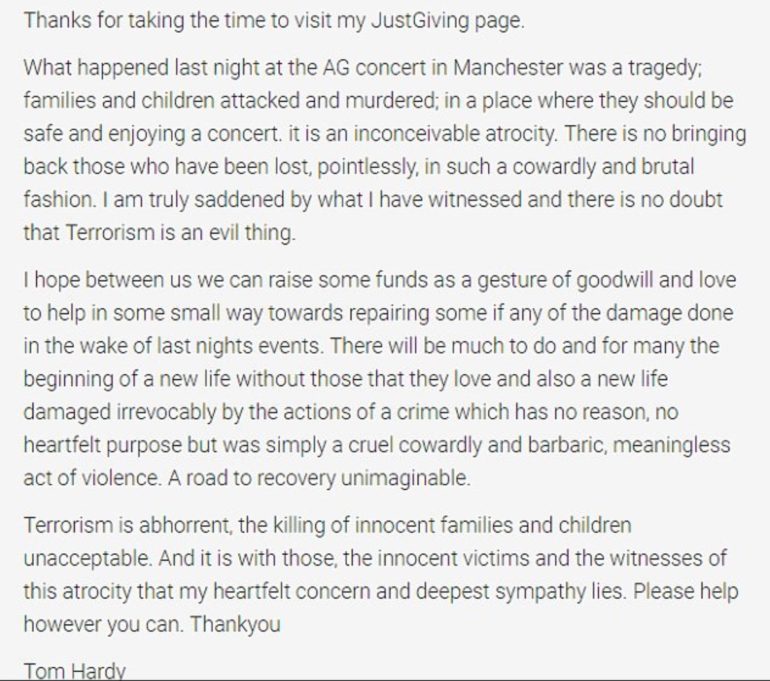 And a little more about it:

Tom Hardy has launched a JustGiving page to raise money for the victims of the terror attack in Manchester, which he calls ‘cruel, cowardly and barbaric.’
The 39-year-old actor has set up a fund to raise money for the British Red Cross, in order to support the victims and their families of the tragic bombing – and has already raised over £18,000.
In a heartfelt post on the page, the Peaky Blinders star urges fans to donate ‘as a gesture of goodwill and love’ following the ‘inconceivable atrocity’ that took place at the Manchester Arena, following Ariana Grande’s concert on Monday.

On Thursday, JustGiving verified the actor’s page as genuine – which has already seen 800 donations amassing to a huge £18,560.

So to recap — Ariana Grande announced she is canceling her tour.
Tom Hardy announced a plan to raise funds for the victims.

If you want to get involved, Here’s Tom Hardy’s link.

For those of you waiting for the Government to step up with a solution? Read this. You need it.