Will Snopes be weighing in on this one? Or are they too busy undermining Conservatives?

As someone who works for NBC, you’d think she’d be better at being skeptical. Her ‘journalistic’ instincts are WAY off.

The same person who uncritically retweeted a completely bogus Trump-bashing tweet because it affirmed her biases once went on record publicly doubting a wheel-chair-bound man’s SUPPOSED DISABILITY.

Maybe we’ll later learn she has inside evidence about FDR’s supposed disability, too.

But this ‘journalist’ who is so VERY objective that she takes NOTHING at face value retweeted this:

A short clip that sums up this G7 summit: look who has chosen not to hear a translation of his Italian host's speech #G6 pic.twitter.com/6pXbBlfvof

In it, the video pans across leaders, where most of them are wearing headphones that are very prominently visible. No headphones are visible on Trump in that particular clip. So, rushing ahead blindly — just like they did with the MLK Bust story… she took it as gospel.

Not content to merely PASS ALONG a bogus story, she needed to editorialize it, too. It’s what passes for ‘professional and impartial’ in the networks these days.

If you weren’t sure why we call the Media (D) ‘Presstitutes’… this should clear that up for you. 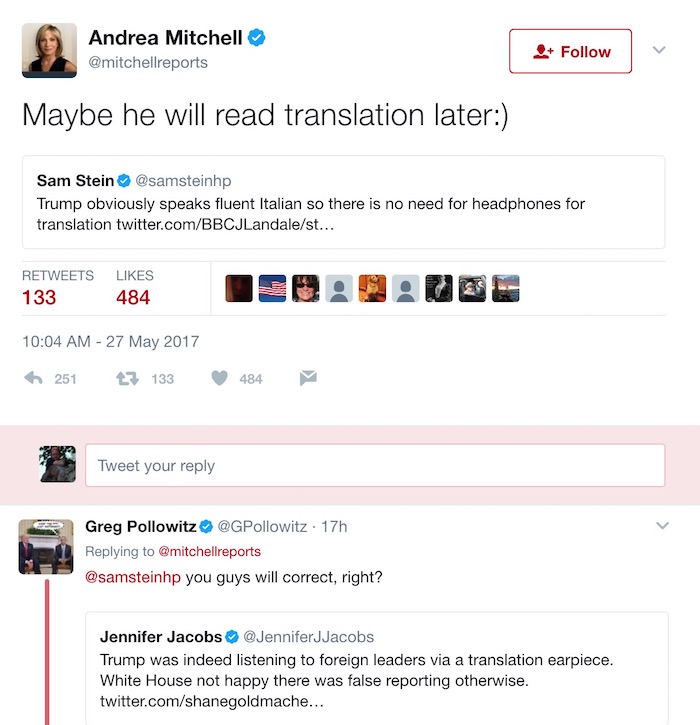 As usual @POTUS wears a single ear piece for translation in his right ear https://t.co/Opm2qk1hOQ

The guy whose clip she retweeted issued a correction.

There used to be a time where journalists were expected to tell a STORY, and to be APOLITICAL — not build a pro-Democrat/Anti-conservative narrative.

But she, like the rest of the Media (D) works as a Presstitute. Which means never having to say you’re sorry.

Build the narrative. Throw some darts — context and evidence be damned — and move on before your audience has time to realize they’ve been fed a spoonful of crap.

Back in February, we began a list of some of the bogus stories the Media has been shoveling our way.
KEEPING SCORE: Here Are SIXTEEN ‘Fake News’ Stories … Published SINCE The Election Obviously, that list is longer now. But it’s good to remind ourselves of the times they’ve been caught pushing lies before. It helps put BS like this in proper perspective.

And here’s one about the supposed Fact-Checkers themselves… plus a handy little tool for making the bogus news narrative backfire on the Leftists.

It’s a good gig if you don’t have to look at yourself in the mirror.

Of course, if the day comes that people realize you’ve been shoveling sh-t all along, you’ll have to go out and get real work. Good luck with that.