This is complete B.S. How would you feel if this happened in your backyard?

A mosque in Basking Ridge, New Jersey, not only has the go-ahead to be built despite concerns over changes in city zoning, but the taxpayers have to pay $3.5M to the mosque because of lawsuits filed against the town.

Here is the plan for the mosque: 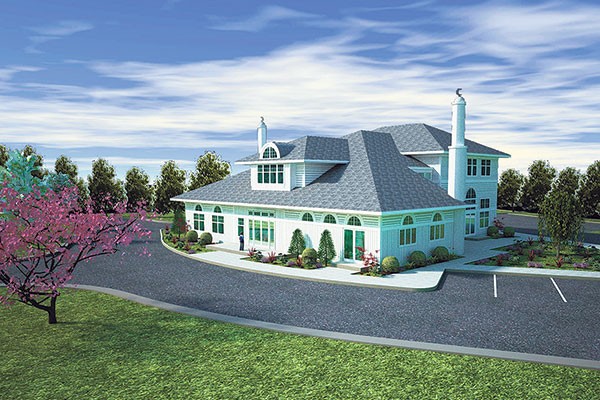 An Islamic society in New Jersey is allowed to move forward with plans to build a mosque, and the town that had denied it permission will pay $3.25 million, as the result of settlements finalized Tuesday in two federal lawsuits.

The two lawsuits were the latest in a nearly four-year dispute between the Islamic Society of Basking Ridge and Bernards Township, New Jersey, which had denied zoning approval for the Islamic society to build a mosque. It would have been the first and only mosque in the town, and the society bought the proposed mosque site because zoning of the land permitted houses of worship, according to court documents.

The town says that the dispute was never about the building of a mosque, but about creating a mega-structure in a residential area that would re-zone the neighborhood and alter the quality of life for people that live there.

Michael Turner, spokesman for Bernards Township, said in a statement the township had entered the settlement on the advice of counsel as “represents the most effective path forward” and that the planning board’s rejection of the Islamic society’s application to build a mosque was always based on accepted land use criteria and was never discriminatory.

“The settlement agreement addresses the land use concerns of the planning board and incorporates conditions previously agreed upon by the ISBR and the planning board during the application process and deliberations,” Turner said, “Bernards Township is a diverse and inclusive community, where for years the ISBR congregation have practiced their religion along with their neighbors unimpeded, using township facilities at the Bernards Township Community Center and at Dunham Park.”

The Islamic Society is thrilled with the result of the lawsuits.

“We are very pleased by this resolution and hope to receive prompt approval to build our mosque,” said Dr. Mohammed Ali Chaudry, the named plaintiff in the lawsuit and president of the Islamic society. “We look forward to welcoming people of all faiths and backgrounds to our mosque. Our doors will be open to anyone interested in building bridges to promote harmony in the community and peace in the world.”
Read more: CNN

What would you think of this happening in YOUR town?