When O’Reilly was ditched by the advertisers that signaled the beginning of the end. Is that what’s happening to Hannity?

Sean Hannity has been a proud supporter of our Military. He has been a strong advocate and friend of the serving members and veterans alike. He has donated his time and money to the ‘Freedom Alliance’ which gives scholarships to the children of soldiers that have been killed.

So, after all of that, why is the USAA ditching Hannity?

From outside pressure by left-wing groups like Media Matters?

This dump by USAA has got to sting after all that he’s done for the military.

Fortune magazine reports that advertisers are being pressured by left-wing groups to drop their advertising on Sean Hannity’s Fox News program, and at least five have complied with that campaign. But the obvious odd bird on that list is USAA, founded by Army veterans almost 100 years ago. This company’s brand is all about support for veterans….and they’re turning on Sean Hannity?

For years, Hannity has donated his time and his celebrity to promoting “Freedom Concerts” to raise money for the Freedom Alliance, which gives scholarships to the children of slain soldiers. Is that really the way the USAA demonstrates its support for veterans?
Read more: MRC Newsbusters

Her is a screenshot of a portion of their Twitter page today: 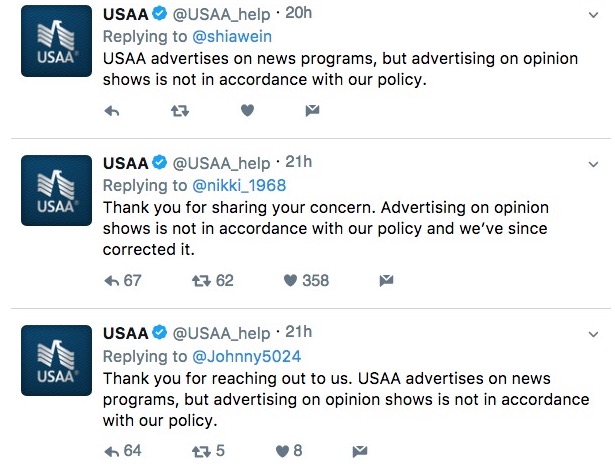 The odd thing is… MRC is reporting that USAA is still advertising on MSNBC’s Hardball with Chris Matthews. Is that a ‘news show’ or an ‘opinion show’?

Mr. Thrill Up His Leg is now hard-hitting journalism?

To be fair, that does sound like the ‘news’ these days.

Are you ready to boycott USAA?