Who’s the worst of the bunch?

The Late Night Talk Shows are pretty much interchangeable at this point.

They seem to follow the same script, Opening monolog that slams President Trump in some way, a couple of un-funny bits and then virtue-signaling guests that flaunt their Progressivism. 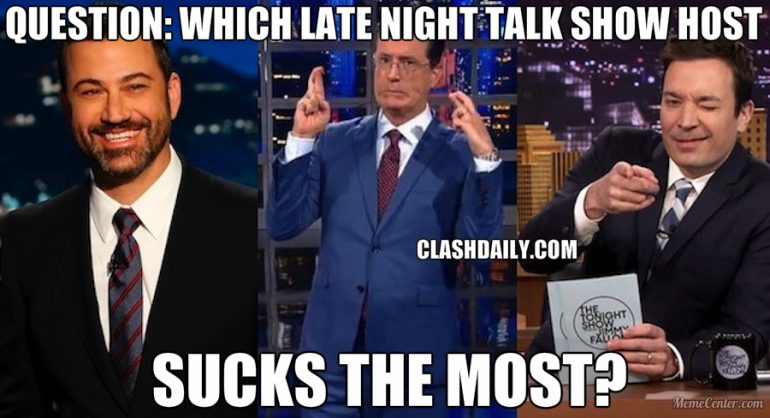 There was Jimmy Kimmel using the situation with his newborn to appeal for socialized healthcare. Kimmel was also really, really pro-Hillary and pushed it before the election.

Stephen Colbert sparked outrage on the Right AND the Left with his ‘joke’ about The President and Vladimir Putin. Colbert made a career mocking O’Reilly and right wing media in general.

And then there’s Jimmy Fallon…

Well, he did that lame Trump impersonation in February.

But he did have President Trump on when he was a candidate and had a really nice moment.

QUESTION: Which Late Night Talk Show Host SUCKS The MOST?

Or, to rephrase the question, who do you think needs this book the most?