The LEFT-leaning media has its collective head crammed so far up its own *ahem* … ‘Bubble’ that it doesn’t even UNDERSTAND that it’s biased.

It’s like trying to explain to a fish that he’s wet. The acclimation is so complete, they don’t even notice it.

Buzzfeed, for instance, actually claims it wasn’t politically biased. Someone even went on Tucker Carlson’s show to say as much.

Becuause that isnt’ what the screenshots say.

You can lie to Tucker Carlson, but you can’t lie to the Secret Service.

You were all daydreaming about an assassination. You felt SO blaze about it, you were lamenting how Obama was gone and yo miss him already. (Such an IMPRESSIVE professional distance you have there.

Does THIS exchange ring any bells? Slack, if you’re not familiar with it is an app — not unlike twitter or WhatsApp that lets a group of people (often workgroups) maintain discussion threads on individual topics. 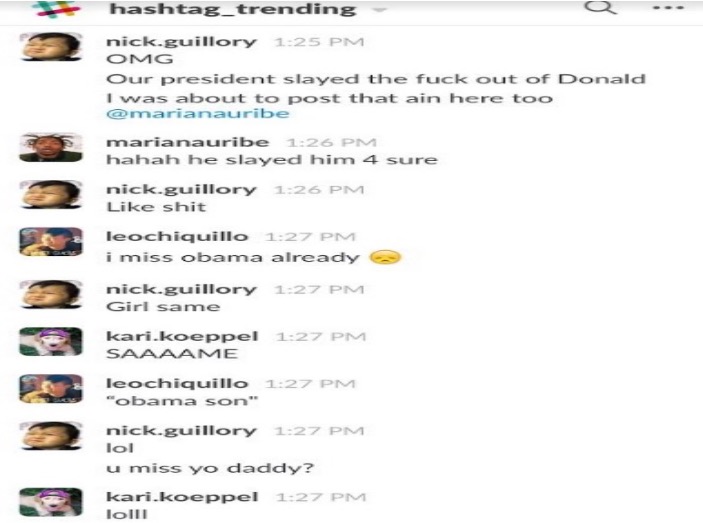 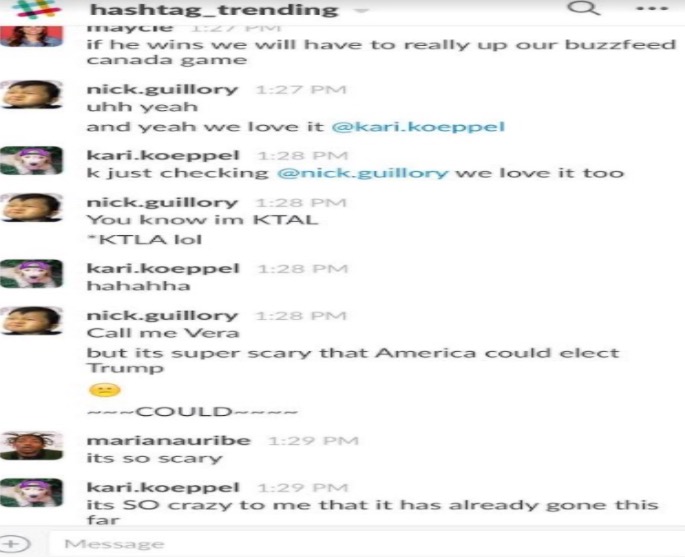 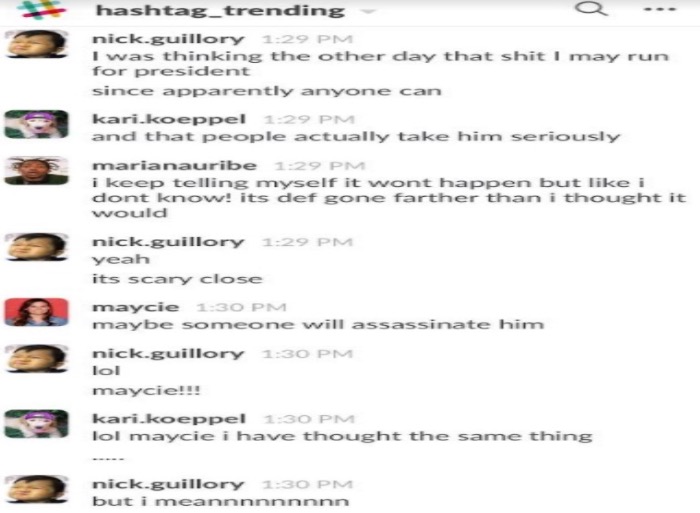 Oh look. Daydreaming of the murder of a person with whom they disagree about policy.

What Too blunt? You prefer daydreaming about violent acts of teason? Violently usurping the due process whereby We The People chose someone to be our designated leader?

Imagine it was Obama’s murder being fantasized about? By people within a ‘news’ organization?

You’d want the offender frogmarched into prison. Like the guy who they whipped up as scapegoate for the Benghzai ‘unpleasantness’. You’d want all news credentials stripped from anyone connected to the company… for safety reasons.

The holy grail for right-wing media critics is finding proof that the liberal coastal media is hopelessly elitist. That it loathes President Donald Trump and maybe even his supporters. That every single political reporter in New York, Los Angeles and San Francisco was emailing directly with Hillary Clinton during the presidential campaign, and that we all cried snowflake tears into our pillows as she conceded defeat.

That last part is probably true.

On Wednesday night, the right got its wish in a scoop by conservative site Big League Politics. Cassandra Fairbanks, a pro-Trump political journalist there, was given a seemingly genuine screen shot of an online conversation purportedly between employees of the Los Angeles office of BuzzFeed,

In any case, Thornton could have been forgiven for thinking that strong anti-Trump sentiment would be allowed at Buzzfeed’s workplace; back in late 2015, Smith wrote in a memo to his employees that, as far as coverage of Trump’s then-improbable campaign was concerned, it was “entirely fair to call him a mendacious racist.” More recently, the site published what has come to be known as the “Golden Showers” intelligence dossier, which describes lewd sexual acts in which Trump, as a private citizen, allegedly participated at a Moscow hotel. BuzzFeed was criticized for publishing the unverified dossier, which virtually all other mainstream sites refrained from doing.

Although Carlson and Smith did not discuss the Thornton message about a Trump assassination, the far-right will likely do its best to play up the outrage. — Newsweek

Yes. Newsweek was apparently still around. Some of you will have just lost a bet.

They dare to mention ‘drummed up outrage?’

Outrage? Have they LOOKED at Berkley lately? Or Portland?

Have they fogotten the Hitler and Nazi comparisons… even by ‘respected’ media types? On any given weeknight some of the more animated critics (Rachel Maddow, for example) seem to be only moments away from beginning to foam at the mouth. Way to put the ‘mad’ in Maddow, lady.

Flash back a couple of years when Tea Party everything was racist. And Andrew Breitbart — the man himself, not the news agency — Called Bull—t.

He put out a challenge:

When I offered a reward of $100,000 to be donated to the United Negro College Fund if anyone produced video and audio evidence that this occurred, I was accused of a publicity stunt (because everyone knows that the best way to get publicity in America is to accuse a civil rights icon of lying about racism). Rep. Carson himself suggested that my challenge was “a veiled attempt to justify actions that are simply unjustifiable.” Get it? He calls protesters racist and if you ask him to prove it, you’re a racist, too.

The Left is used to drumming up outrage about the Right for any reason, and no reason at all. Now they’re being called out on their biases. And they don’t like it.

Bold people of conviction that they are, speaking ‘truth to power’, they bravely ran away.

Will CEO Jonah Peretti condemn his employees calling for the assassination of President Trump?

UPDATE: Shortly after this report was published, all three BuzzFeed employees implicated in the leak set their Twitter accounts to private. (Source)

Here’s a slightly LONGER list that will help the folks at Newsweek who seem a little slow to understand what is pretty obvious to those of us without our collective heads thrust firmly up Democratic assumptions.