How do you feel to learn THESE are the folks who’s ‘capable hands’ our children’s education has been entrusted?

It doesn’t take much to mobilize the PC Police these days.

As a district, we do not & will not tolerate inappropriate conduct toward any of our students. #RCSStudentsFirst pic.twitter.com/xDVKkY8zD6

There WERE a lot of comments. More than 100 on the screen capture from one site.

But mysteriously, they’ve all been scrubbed.

They are pulling the Yearbooks because one of the students wrote something upsetting in it. What was the ‘upsetting’ thing that was written? 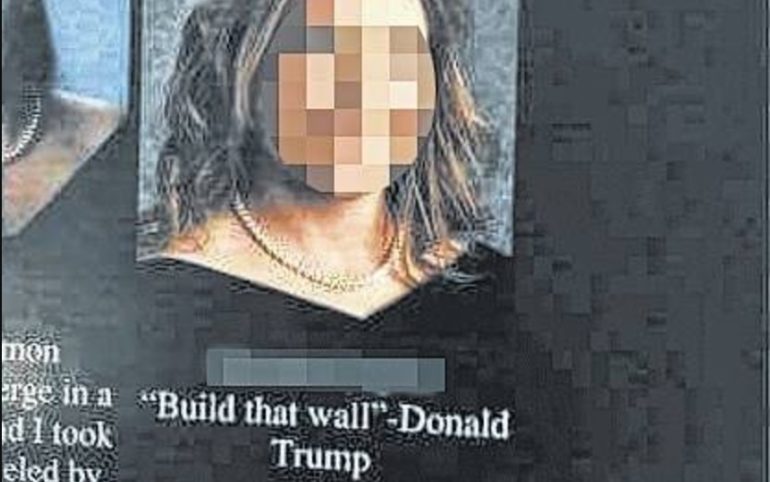 They started recalling the yearbooks this week after a screenshot of a blonde female student’s photo with Donald Trump’s campaign slogan as her quote appeared on social media.

This caused outrage from critics who called the school “racist.” The school now says the use of Trump’s quote amounted to “inappropriate conduct” which it would never “tolerate.”

The school decided not to take any disciplinary action against the girl. However, some feel the school’s decision infringed on the student’s first amendment rights. (Source)

This isn’t just some lame backwater school. This one brags about being the cream of the crop!

It’s part of something called the ‘Schools To Watch’ Program, a national program which places it among the top 400 schools.

Schools to Watch® is an initiative launched by the National Forum to Accelerate Middle-Grades Reform in 1999.

Through the Schools to Watch® initiative, the National Forum identifies schools across the United States that are well on their way to meeting the Forum’s criteria for high performance. Forum members believe that three things are true of high-performing middle-grades schools:

They are academically excellent — these schools challenge all students to use their minds well.

They are socially equitable — these schools are democratic and fair, providing every student with high-quality teachers, resources, and supports.

To achieve this level of performance, high-performing schools establish norms, structures, and organizational arrangements to support and sustain their trajectory toward excellence. They have a sense of purpose that drives every facet of practice and decision-making. —MiddleGradesForum

So it would seem that the ‘excellence’ to which they are committed includes a lot of things, but a commitment to the First Amendment is NOT among them.