Did he rough the kid up? He says he was doing his job.

At first, a kid is walking down the hall. And then… 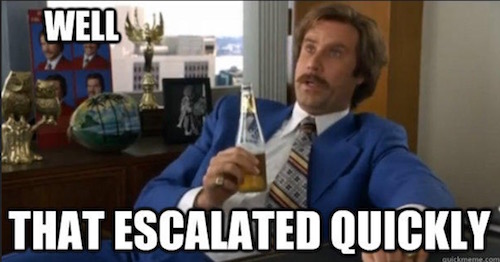 Footage catches him being lifted by the neck and shoulder. Feet are right off the ground at some points.

Assault charges have been laid, against Joseph Golden III, 50, but the school staffer maintains that he was ‘just doing his job’.

Do you buy it?

Keep in mind, the kid on the video is 13 years old.

Golden then proceeds to lift the boy by the neck twice and carries him back down the hallway.
Allegheny County Police charged Golden on May 9 but his lawyer asserts that the specialist was just doing his job.

From what I saw, all he did was grab him and take him down the hall. He didn’t choke him, defense attorney Pat Thomassey told KDKA.
‘He picked him up around the neck and shoulder. The kid didn’t go to the hospital, he didn’t go to the doctor, he told the principal he wasn’t hurt.
‘This isn’t a simple assault. I don’t understand.’ –(Source)
Read more: Daily Mail

We can’t speak for you, but anyone trying to lift MY kid by the throat — for ANY reason, however ‘good’ he thought it was — would have to answer to me.

What do you think? Is he ‘an expert’ … making it ok? Or are there some things that NOBODY should do to your kid?