What do yo call a Politician who keeps his promises?

Since January, you call him “Mr. President”.

The champagne-swilling Socialists cannot understand why the people love him. But it isn’t that complicated. He makes promises. And then keeps them.

And before he even got into the meat of it, he spoke like a President who actually believes in Making America Great Again, who cares about people as *gasp!* — INDIVIDUALS. Like the hero cops in Alexandria. Like Otto Warmbier. Like war vets from the Bay Of Pigs.

Instead of as seeing Americans as ‘constituencies’ and ‘voting blocks’ like the other side always seems to, he focusses on individual stories. And FREEDOM.

Here is his speech.

And it doesn’t take too long to realize, the guy who gave us THIS unfortunate photo… 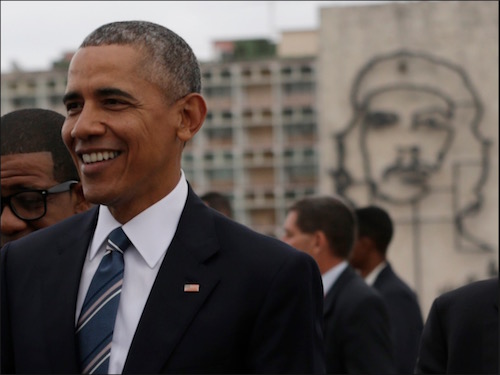 …is no longer calling the shots.

Democrats were trying to spin this policy change as wanting to ‘hurt’ Cubans. Good luck with that. You will fail.

It’s no surprise Democrats don’t ‘get it’.

It’s about FREEDOM! Where Cubans — like Americans — can live their OWN dreams.

Looking at the faces of the people he brought on stage, those who suffered under Castro will have a hard time telling that story.

Trump called out and enumerated Castros Crimes for what they are. Political prisoners. Corruption. Human trafficking, harboring fugitives.

Making peace with a regime that embraces those things was Wrong for America, and Wrong for the Cuban citizens that suffer under it.

Trump is now making good on his promise to smash Obama’s Cuban deal. He is canceling the previous administration’s deal with Cuba.

He does not want to prop up a military monopoly to threaten peace and security, or harm Cuban citizens.

Prerequisite to normalized relations will be the release of political prisoners and the establishment of human rights.

The Embargo is back!

President Trump will be working for America’s values. And the Cuban people.

He will NOT be kowtowing to the regime. He expects THEM to meet us on OUR terms. He is DONE with Obama’s ‘lead from behind’ ass-kissing.

He also insists on the return of fugitives from American justice!

He will respect Cuban sovereignty, but any changes on the relationship with America and Cuba will require REAL changes. Then — and only then — will US-Cuban relations be normalized!

And then he ended with an amazingly heartwarming story that embodies exactly the principle he was speaking about.

He addressed the special connection between Cuba and America … rejecting their Oppressors … but embraced their people.

He shared one story about the great symbol of hope America has been, to ordinary Cubans.

If the Cuban violinist’s story doesn’t make your heart swell with pride… you should check your citizenship.

He closed in a way you would WANT a President to close:

May God Bless everyone searching for freedom…

May God Bless You all…

Finally, we have a President again who thinks of America as a Shining City on A Hill.