This is kicking them when they’re down. And we love it.

Maybe were thinking that only their NEWS was fake.

We wonder if Acosta will be changing his ‘pinned tweet’ after this embarrassing week?

TwitterAudit just POUNDED CNN where they can least afford to take a hit: in their credibility. 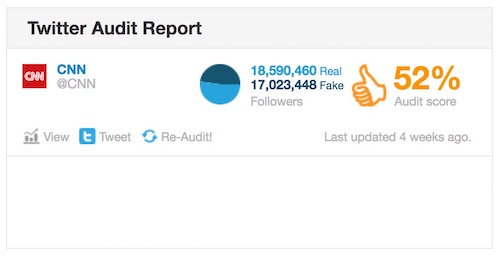 According to TwitterAudit, the site determines the quality and score of real and fake followers by taking “a sample of up to 5000 (or more, if you subscribe to Pro) Twitter followers for a user and calculates a score for each follower. This score is based on number of tweets, date of the last tweet, and ratio of followers to friends.”

TwitterAudit states that these results are not definitive but do provide insight into whether or not a Twitter account gained followers through illegitimate means: “We use these scores to determine whether any given user is real or fake. Of course, this scoring method is not perfect but it is a good way to tell if someone with lots of followers is likely to have increased their follower count by inorganic, fraudulent, or dishonest means.” –Read More

This will not help the craptastic week they’re already having.

They yanked a story…

Had a cringy Segment discussing Refugees with a Sesame Street character.