The Leftists think it’s a free-for-all to attack anyone that supports President Trump and/or his policies.

Many have weighed in on the Kathy Griffin career-imploding move, but it was former Jeopardy champion, Ken Jennings that really stepped in it.

President Trump’s tweet about Barron having a difficult time when he saw the image was enough to make Jennings’ claws come out.

Ken Jennings was made ‘famous’ by being the longest-running winner on the game show, Jeopardy. He won 74 times before being defeated and amassed $3,196,300. 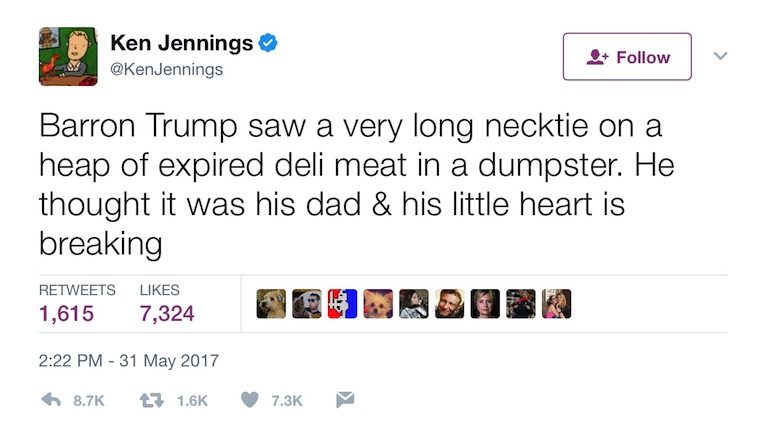 The former game show contestant took to Twitter and responded to reports President Trump’s 11-year-old son thought the fake severed head Kathy Griffin was holding in the horrifying photo was really his father.

The 43-year-old wrote on Wednesday: ‘Barron Trump saw a very long necktie on a heap of expired deli meat in a dumpster. He thought it was his dad & his little heart is breaking.’

‘Yet another low from the left, but they will rationalize this away with their usual excuses.’
Read more: Daily Mail

Call them out on their crap.

Bullies that pick on kids.

And this guy’s supposed to be a genius?

But it gets better.

And he’s not backing down.

Instead, he mocked Don Jr.’s love of hunting in a bizarre tweet.

You bullied a child and you are supposed to be a children’s book author.

Do you think that proves your masculinity or that you’re a major douchebag?

It’s also what we’re calling ‘Pulling A Kathy Griffin’ — what was previously known as a ‘career limiting move’.

As for ‘killing white rhinos to prove your masculinity’…

Ken, Honey, there haven’t been enough white rhinos since the foundation of the world to prove that.

Besides, your 15 minutes of fame were up when you finished that stint on Jeopardy.