At what point have you crossed that line to ‘incitement of violence’?

This Democratic operative has gone beyond mere ‘bare-knuckle’ rhetoric.

In response to an actual MURDER attempt on the lives of several Republicans, one Democrat is rubbing his miserable hands in glee.

James Devine posted several messages on Facebook and Twitter following the Alexandra, Virginia, shooting of U.S. Rep. Steve Scalise and several others by a gunman with a history of violence and of making online rantings against Republican officials and their policies.
“We are in a war with selfish, foolish & narcissistic rich people. Why is it a shock when things turn violent?” Devine posted on social media, ending the message with the hashtag: #HuntRepublicanCongressmen

Pay no attention to the wealth of Clintons and their supporters, or to the fact that the biggest Liberal donor is Soros, who is manipulating global politics to whip up EXACTLY this sort of reaction.

He’s pretty selective in his outrage, though. He retweeted this:

…despite the fact that Hillary Clinton herself was ON THE BOARD Of Walmart, AND got paid for speeches to Goldman Sachs.

James is not speaking the language of decent American politics.

He is speaking the language of Lenin and Mao. It is nothing less than old-school 20th Century violent class warfare.

“I have little sympathy for the Republican Congressman who got shot today because he viciously opposed President Obama’s effort to reduce gun violence and instead, he accepted more gun lobby money than all but 15 other members of the House of Representatives,” he said on Facebook.
The comments drew criticism from others who follow Devine on Facebook and Twitter.
But Devine told New Jersey 101.5 that he is not backing down, although he insists his comments were meant to shock but not advocate violence.
“It is insensitive and I don’t care. You want me to be politically correct? I don’t have time for that anymore,” he said.

He claims he ‘isn’t advocating violence’.

We’re calling Bulls–t. And we can prove it.

Take his snarky little #HuntRepublicans hashtag and switch it up a little.

Put THAT word in the same place as you would see ‘Republicans’. Is THAT ‘advocating violence’?

Of course it is, they’d be the FIRST to say so.

The phrase itself is an IMPERATIVE.

But why should he be honest about it? He knows the Media (D), and the Democrats will protect him.

Here are his recent tweets. The ones that got the attention: 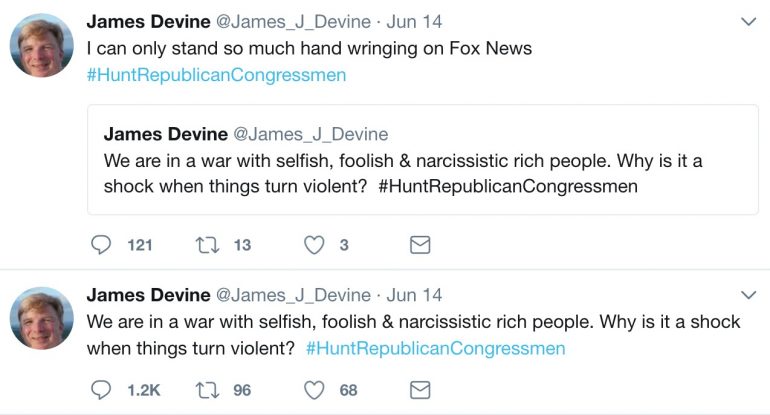 And here he is doubling down:

Why bother this guy with facts?

Don’t expect that to have any impact on what he’s been saying. Only a journalist with Integrity would make a retraction when he is wrong. And as you can see…

He thinks quite a lot of himself. From his Twitter page:

Over the past 35 years, Devine accumulated experience in every facet of politics (running campaigns for local school board, city council and mayor to state legislature, governor, congress and the presidency) and government (as a top level legislative staff member and manager of a federal agency with 1,150 employees under his command).

For such a ‘masterful’ democratic strategist, he really doesn’t seem to understand that Anti-American crap like HIS … is EXACTLY why Trump’s MAGA message resonated with so many.