Predictably, the media are ‘outraged’ by Trump’s latest ‘attack’.

No mention is made of the embarrassing rhetoric his critics churn out every morning.

Where did the ‘Morning Joe’ that did the Mea Culpa after the election go to? The guy that said this about the heavy Pro-Hillary bias, and the condemnation of all Trump voters as ‘bigots’.

That brief, glimmering moment where he was ready to report politics honestly. What happened to that? Oh. He got caught in the same trap as Rachel Maddow did with his taxes and CNN did with the Russia Story.

‘Morning Joe’ has raised the discourse by turning the ‘shrill’ up to eleven. If you’ve missed it, Hannity has put together some of their more embarrassing moments.

But let Trump hit them back, and people lose their minds! Here is what the President said about them on Twitter.

…to Mar-a-Lago 3 nights in a row around New Year's Eve, and insisted on joining me. She was bleeding badly from a face-lift. I said no!

Hey Joe: If you are going to pick a fight, make sure you can win, first.

CNN made a formal statement: 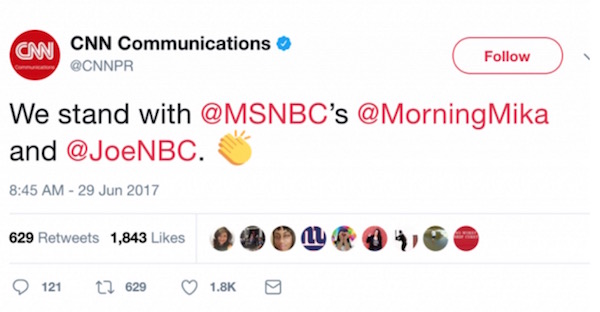 The pearl-clutching provoked THIS response by Pastor and Warriors & Wildmen contributor Rich Witmer.

BULLYING? Get off it, America. This crybaby culture of, “I can talk as much crap as I want about you, but when you say something back, you are a bully” has GOT TO GO.
10 Reasons you shouldn’t talk crap about Trump:
1. He’ll ROAST YOU on Social Media.
2. He has WAY MORE money than you.
3. He’s the PRESIDENT of the UNITED STATES.
4. President of USA = Leader of the Free World.
5. President of USA = Most Powerful Man in the World.
6. Married to a Super Model.
7. His kids are AWESOME.
8. He’s tough as hell.
9. He puts up with NO B.S.
10. He WILL HIT BACK… EVERY SINGLE TIME.
“A fool’s lips walk into a fight, and his mouth invites a beating.” Proverbs 18:6