Why the silence, Hillary? Is it a guilty conscience? Or are you embarrassed by someone ACTING on the hate you spew?

Usually, at any hint of an opportunity, Hillary Clinton makes damned sure she is the center of attention.

She would attend the opening of an envelope if it would benefit her.

(Actually, more than a few envelopes. From foreign governments… which her husband spoke for … but she doesn’t want us to look too carefully at that.)

Normally, she’s right in the thick of things, slinging mud and pointing fingers.

It’s that new thing that she calls ‘taking responsibility’. Not at ALL that old thing they called ‘Clintonian’.

So, now that dirt on a baseball diamond in Alexandria has been bled red by the victims of a ‘Radicalized Democrat’, where is her partisan bravado now? 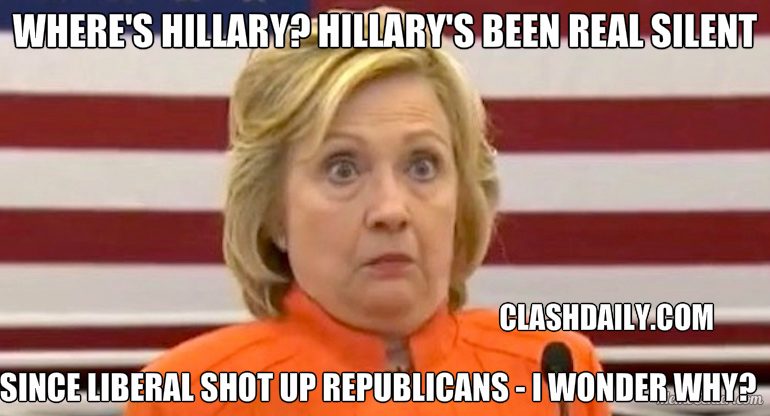 Oh. It would now be ‘bad optics’ to speak up.

She’s hoping nobody will point to just HOW big a role she has played in ratcheting up the hate.

About how SHE has been central to the #Resist movement… despite how she denounced Trump for not proclaim that he would immediately accept her (inevitable) Presidential Victory In November.

But of course, when the storm blows over, she’ll be right back to it.

as legitimately HER President!