It would still be considered ‘legitimate protest art’ if it was any other group targeted instead of whites, right?

Apparently the dictionary definition of ‘racism’ is no longer relevant to court cases.

But here is South Africa defending anti-white sentiment as ‘art’.

FYI: White South Africans (many farmers) have been targetted in violent, racist attacks that the Media (D) remains silent about.

So, perhaps stoking the flames of racism is a bad idea?

A South African gender-queer masters student in fine art, Dean Hutton, posted the reasoning behind the artwork next to it, ‘what we must strive for is complete dismantling of the systems of power that keep white people racist‘. Hutton is white, but claims that it is his?/her? ‘white privilege’ that has made the artwork possible.

Hutton also had an outfit made with the same print. 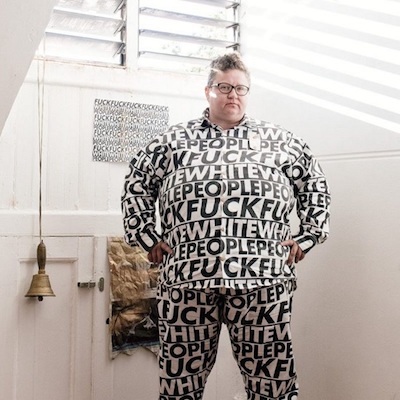 A complaint was made by the Cape Party that the posters were racist and ‘hate speech’.

Magistrate Daniel Thulare shocked the Cape Party on Tuesday by ruling that posters bearing the words “Fuck White People” are not hate speech or racist. The Cape Party, which is a registered political party seeking to declare the Western Cape a sovereign republic, had filed a case against the Iziko South African National Gallery for exhibiting the suit.

The posters, which were covered with the words Fuck White People in black-and-white all caps letters, has been on display since 2016 alongside a chair and “goldendeanboots” as part of an exhibition called The Art of Disruptions at the gallery. The work was created by Dean Hutton, a Masters student in fine art at the University of Cape Town who wore a suit with the same print publicly before Iziko approached them.

Cape Party leader Jack Miller was disappointed in the decision.

“It’s very disappointing. We’re quite shocked by the decision, because it’s a massive setback and it sets a dangerous precedent,” Miller said.

“We’re worried about future actions against anyone, not just white people, but people of all races,” he continued.

Hutton says that it is ‘white privilege’ to be able to bring attention to white racism.

Weird. In some places having a white artist base their work on black intellectual thought leaders is ‘cultural appropriation’.

“My work is a response to the work of, in particular, black intellectual thought leaders and the work gets attention because I’m white. That is a function of white privilege and people need to know that.”

Magistrate Thulare said that the reaction of some white people to the exhibition is to be expected, but reiterated that in Hutton’s work the word white is used within the context of protest art and debate to refer to “structures, systems, knowledge, skills and attitudes which keep White people racist which are to be rejected confronted and dismantled”.

“For reasons I have already given, in my understanding of Hutton, I am unable to find that what they said amounts to advocacy of hatred of for White South Africans based on their race, which hatred constitutes incitement to cause harm,” Magistrate Thulare said in his judgment.
Source: Mail & Guardian

With the constant claims of ‘systemic’ racism against the police and/or anyone that supports the current President, this is not a surprise.

It seems that the only acceptable racial group to hate is ‘white’ people. And now a court in South Africa says that’s ok. 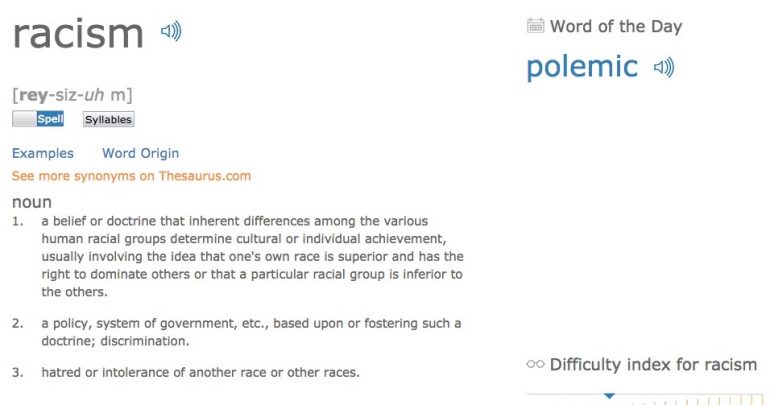 Did you notice the irony of the ‘word of the day’ is ‘polemic’?

Is there anything more ‘polemic’ than an art exhibit with the words ‘F-ck white people’?

Let’s Do A Comparison Of The Henry Big Boy X Versus The Rossi R 92 Both Chambered In .357 Mag
Great American Outdoors