Talk about your lose-lose situation. There are fiery opinions on both sides. Which one are YOU on?

It was supposed to be a nice photo op. It quickly became a PR nightmare.

She was handing out food to ‘Orphans and children with HIV’.

What was the problem with that? She was wearing gloves.

Either that was an OUTRAGE (for a variety of reasons) or the sensible thing to do, and she would have been insensitive NOT do to so.

This is the photo they reacted to: 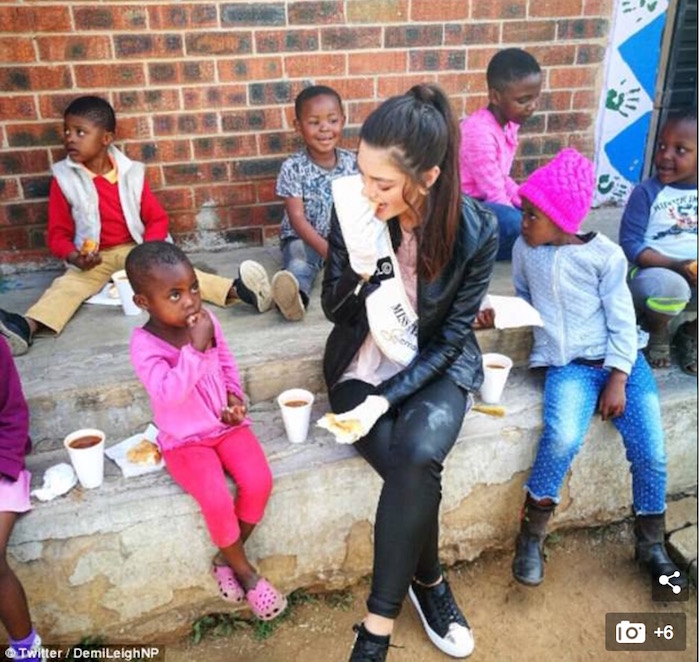 Miss South Africa has sparked fury after she was pictured handing out food to orphans with HIV while wearing gloves.
Demi-Leigh Nel-Peters, 22, also faced allegations of racism from angry people on social media after the images of the charity event in Johannesburg emerged.
But Miss Nel-Peters, who is mixed race, strongly denied these claims and said she wore the gloves for hygiene reasons because she was ‘handling food’.
It came after she was criticised online with people claiming she was afraid to touch children with the disease at the soup kitchen or she was ‘wearing gloves to touch black children’. –Read More

Was the outrage legitimate, or misplaced?

Another wrote: ‘Not convinced you deserve to be Miss South Africa feeding orphans wearing gloves, ayi Shame.’
But in a video message released on Twitter, Miss Nel-Peters said her intentions were misread and she apologised for any offence caused.
She said: ‘I just want to clear something up. All the volunteers on site wore gloves because we were told it was the right thing to do while working with food and we were handing out food to young kids. —

First about the racism claim… she’s mixed, so she should have just as much claim to being black as, say, Obama. It ‘could’ be that, but it’s hard to imagine that’s really the reason.

The second issue was a possible wrong attitude to sick kids.

Is there still a stigma to HIV? It’s halfway around the world in South Africa. Most likely, that’s an issue people are dealing with there, just like some are here.

But that isn’t the only explanation. There’s a far more innocent one, too.

If other volunteers WERE wearing gloves, it would be easily explained away as ‘when in Rome’. She’s the outsider, and it’s expected that should follow everyone else’s lead.

On the other end of the spectrum, can you imagine if she were serving food with ungloved hands? You can be sure someone, somewhere would have complained about her ‘not even wearing gloves while serving food to kids with compromised immune systems’.

It’s sad that helping orphans can devolve into a PR debacle.

What’s the only thing we can be sure of here? She needs to fire her PR people for creating this crisis. And any other people who want to help orphans will either avoid the photo ops altogether or at least avoid handing out food.

She’s not the first Beauty Queen whose political firestorm Clashdaily has reported on. The one who was punished after she tweeted something critical of Islam (and a moronic Liberal) went absolutely viral.