What WAS she thinking? Oh, wait. It’s Chelsea. Nevermind.

Chelsea Clinton and her hubby, Marc Mezvinsky were taking a little vacation.

Marc is currently unemployed, so he’s taking a vacation from sitting around doing nothing.

Did that stop them from kicking back on a high-priced vay-cay?

Well, if they were poor schlubs that have to actually work for a living would perhaps think twice about it.

But not the daughter of Bill and Hillary.

Chelsea Clinton was spotted out in the Hamptons over the weekend, enjoying a weekend away with her husband Marc Mezvinsky.

The pair were spotted out to dinner on Friday night in Amagansett and then out again the following morning as they went to grab coffee with a friend.

Chelsea kept off social media during her trip out to the exclusive and ritzy Long Island hamlet, but got right back to work upon her return by firing back at President Donald Trump for a tweet her wrote about the former First Daughter.

This isn’t the first trip that Chelsea has made to the fancy-schmancy Long Island retreat. In the past she went with her parents.

Chelsea and Marc also enjoyed [a] night out free of their two children on Friday, grabbing dinner in the same Hamptons town.

The Clinton [sic] often rent beach houses in Amagansett, with Hillary and Bill most recently getting one back in 2015 a few months after she announced her candidacy for president.

That summer they rented a four-bedroom home from Republican donor and art collector Andre Nasser and his real estate guru wife, Lois – for the secxond staright [sic] year.

Tell us again how you and your parents understand the plight of the average American, Chelsea?

If that’s not bad enough, she went out in a dress that looks like it was inspired by Yoplait’s Blueberry yogurt. 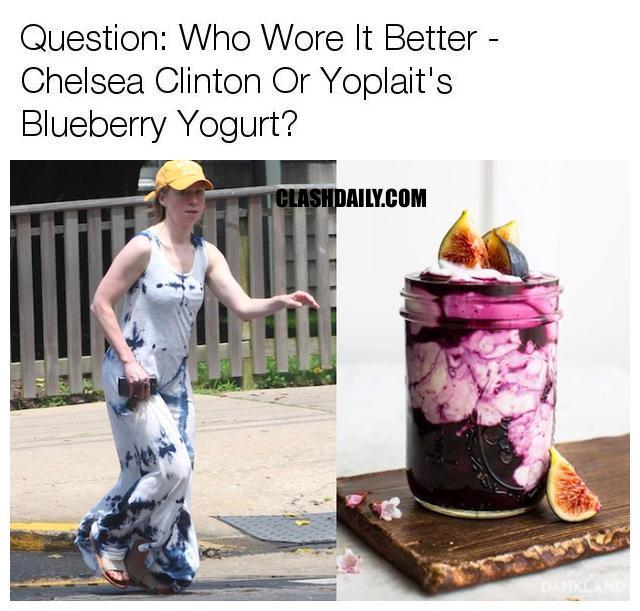 Marc toned down his look. The Daily Mail reports that he wore seersucker shorts.

It looks more like Marc opted to forego the doublet and hose and just wore a t-shirt and flipflops with his ‘petticoat breeches’.

We could also ask, who wore it better — Marc or King James? 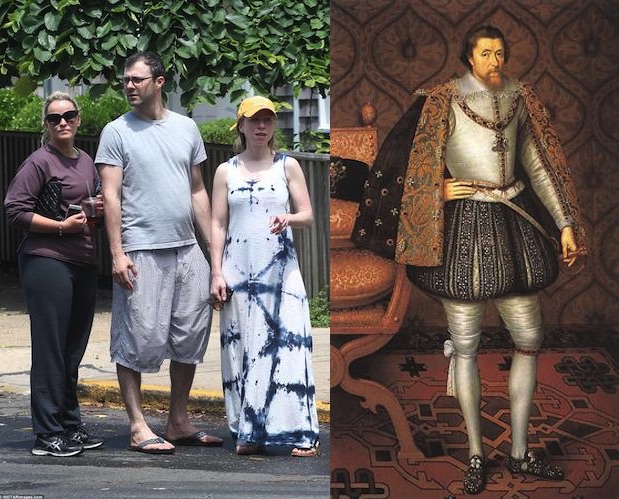 The best dressed in the photo on the left is the friend that accompanied them. And she was wearing sweats.

Y’all need to listen to Doug’s podcast on this very thing.