It’s the same sort of Cancer Ted Kennedy had.

Sad news from the ongoing story of McCain’s health crisis.

The blood clot they had removed was biopsied.

They discovered cancer. Glioblastoma, to be precise.

Washington, D.C. ­– At the request of Senator John McCain (R-AZ) and his family, Mayo Clinic released the following statement today:

“Following a routine annual physical, Sen. John McCain underwent a procedure to remove a blood clot from above his left eye on Friday, July 14 at Mayo Clinic Hospital in Phoenix. Surgeons successfully removed the 5-cm blood clot during a minimally invasive craniotomy with an eyebrow incision. Tissue pathology reports are pending within the next several days.

“The Senator is resting comfortably at home and is in good condition. His Mayo Clinic doctors report that the surgery went ‘very well’ and he is in good spirits. Once the pathology information is available, further care will be discussed between doctors and the family. In the meantime, his Mayo Clinic care team will not be conducting interviews.”

The office of Senator McCain also released the following statement:

“Senator McCain received excellent treatment at Mayo Clinic Hospital in Phoenix, and appreciates the tremendous professionalism and care by its doctors and staff. He is in good spirits and recovering comfortably at home with his family. On the advice of his doctors, Senator McCain will be recovering in Arizona next week.”

As available, more information on Senator McCain’s progress will be made public. -McCain’s office website 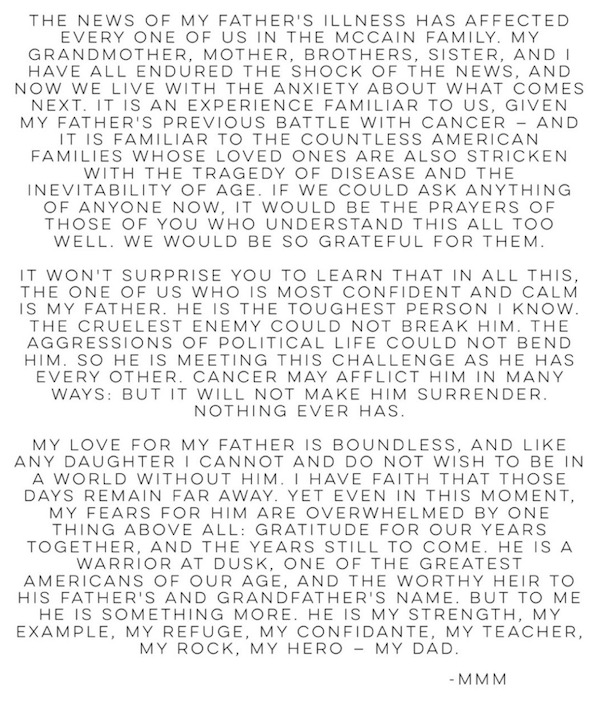 While may not always agree with Senator McCain, and ClashDaily often gives him a rough ride for specific policy decisions, at a moment like this, we set all that aside and wish him every success in his battle with Glioblastoma.

Decisions in treatment have not yet been announced.