UPDATE: The Great Ormond Street Hospital attempted to block Charlie’s parents from attending the meeting of the US and UK doctors on Charlie’s status.

These people just can’t stop trying to kill this baby, can they?

Charlie Gard’s parents exploded with frustration in the High Court today after Great Ormond Street said they should be excluded from a make-or-break meeting with his doctors.

Dr Michio Hirano, the US doctor who wants to save him, has agreed to fly to the UK and examine the baby on Monday – and will then meet his British medics to discuss whether he is brain damaged on Tuesday.

But Katie Gollop QC said Great Ormond Street thought it would be better if Charlie’s parents were excluded because clinicians may not be able to ‘speak freely’ with them there.

Charlie’s father Chris Gard then shouted out ‘he’s our son’ and Connie Yates started to shake her head angrily.

Their legal team then argued Miss Yates knows as much as the experts on Charlie’s condition and Mr Justice Francis agreed she should attend Tuesday’s meeting.
Source: Daily Mail 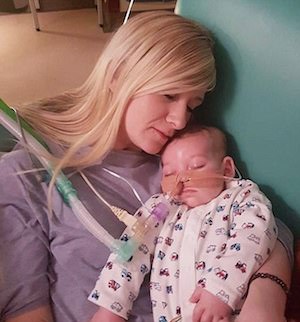 This is fantastic news for Charlie Gard and his parents, Chris Gard and Connie Yates.

The language is so telling, though. The court is ‘allowing’ Dr. Michino Hirano to come and examine the now 11-month old baby that has been the center of a battle between socialized health care ‘experts’ and Charlie’s parents. How magnanimous of the court.

The case has garnered international attention with many discussing who is right and who is wrong.

Vatican’s Position On A Baby Condemned To Die Is Disgusting!

At heart is ultimately who has the right to make the decision on what is best for baby Charlie — his parents, the medical experts, or the courts?

In his decision, Mr. Justice Nicholas Francis of the High Court’s Family Division said that Charlie’s parents have no control over Charlie’s care. Instead, it rests with the courts.

The duty with which I am now charged is to decide, according to well laid down legal principles, what is in Charlie’s best interests. Some people may ask why the court has any function in this process; why can the parents not make this decision on their own? The answer is that, although the parents have parental responsibility, overriding control is vested in the court exercising its independent and objective judgment in the child’s best interests. The Great Ormond Street Hospital has made an application and it is my duty to rule on it, given that the parents and the hospital cannot agree on the best way forward.

As ClashDaily reported, even the Vatican had initially — and shockingly — advised the parents to stand down.

For perspective on THAT aspect of the story here is another Pope’s famous quote:

A society will be judged on the basis of how it treats its weakest members; and among the most vulnerable are surely the unborn and the dying.
–Saint Pope John Paul II

The Gards have gone through so much. They have fought to get care for their son for months, even raising $1.7 million U.S. to get him treatment in America. They have been denied at every turn.

They weren’t even permitted to take him home to die in his home.

The judge angered Connie Yates and Chris Gard yesterday causing the couple to storm out of the courtroom.

Connie Yates and Chris Gard were angry after apparently being misquoted regarding the 11-month-old’s quality of life.

Mr Gard punched a table, stood up and said: “I thought this was supposed to be independent.”

His wife said: “We said he’s not in suffering and in pain. If he was we wouldn’t be up here fighting.”
Source: Sky News

The judge apologized in court today, and after hearing Dr. Hirano’s video testimony about the 11 to 56 percent chance of ‘clinically meaningful improvement’ for Charlie with his experimental treatment, said that he was ‘open-minded’ about the evidence. Upon further questioning, Dr. Hirano said he would need to examine Charlie to get any more specific about prognosis.

An American doctor will head to the UK next week to examine Charlie Gard, the 11-month old boy suffering from a rare genetic disorder.

High Court Judge Nicholas Francis said Friday that he was “open-minded about the evidence” to come after the visit of Dr. Michio Hirano of Columbia University Medical Center.

Hirano’s research focuses on mitochondrial diseases and genetic myopathies and he has treated others with conditions similar to Charlies.

The New York doctor, who is also a professor of neurology at Columbia, testified on Thursday that Charlie has a 10 percent chance of improving with experimental treatment available in the U.S. The judge ruled he could meet with Charlie’s doctors to discuss his case.
Source: Fox News

Is it weird to you that hospitals and courts could usurp parental rights like this?

These are not abusive parents.

It’s not like Yates and Gard have been anything but attentive and loving towards Charlie.

They wanted a second opinion and an opportunity to try every chance for their son to live.

Isn’t that what loving parents do?

The decisions about Charlie’s life or death are being made by government and courts even though these same entities have found that Charlie’s parents, Connie Yates and Chris Gard, have been devoted to their son since his birth. Despite this state of consensus, Charlie’s parents are still not permitted to determine what is in their son’s “best interests.”

Americans may find this point of reference difficult to fathom, but it is staring them in the face with the potential for single-payer, government-run healthcare, in the new fervor for laws that allow physician-assisted suicide, and in the periodic push for acquiescence to external bodies, such as the United Nations Convention on the Rights of the Child, a treaty that allows the U.N. to decide the rights of children in any member nation.
Source: Breitbart

So the lives of children — that they’ve never met — are now in the hands of a bunch of clowns at the U.N.?

And look at how they’re handling it — pulling the plug is ‘compassionate’.

They are advocating killing this child.

These are heartless bastards.

When there is a case like this — and that of Terry Schiavo — the ‘compassionate’ thing to do is to side with life.

I may have read somewhere that people are ‘…endowed by their Creator with certain unalienable Rights, that among these are Life, Liberty and the pursuit of Happiness.’

I thought that was self-evident.