Look who just dropped the gauntlet to the ‘Big Is Beautiful’ movement… ‘Bigly’.

Sports Illustrated was celebrated for having a ‘plus-size’ model for their swimsuit edition.

And THAT is what he’s reacting to. The swimsuit edition, if we’re honest, is a marketing ploy for SI, it’s to generate interest in bros who would normally catch their sports news on tv or online for free.

The women in that magazine — while not actually flashing the camera like the skin mags do — were chosen because they possess the ability to make a man’s pulse quicken a little, to draw a man to pick up the magazine. To flip through it.

But, like ESPN, SI has buckled to political pressures. They’ve added plus sized models like Tabria Majors to the mix of other models like Kate Upton.

Our girl @tabriamajors is one curvalicious babe! #SISwimSearch #SISwim @swimmiami

For some inexplicable reason, American entertainment outlets think male consumers are entertained by “plus-sized” models. They’re not. Trust me when I say that there’s a reason men read the Sports Illustrated Swimsuit magazine, and it has nothing to do with the seemingly unending supply of bigger models.

…Men want to look at those women because, generally speaking, we don’t see them walking around the streets. That’s why they’re supermodels. It’s because women like them rarely exist. I see women like Majors on my walk to lunch.

I understand that this garbage is done to push a social narrative and nobody has the balls to criticize out of fear of being called a bigot or much worse. If I’m the only one willing to carry this banner and fight the good fight then so be it.

I can no longer allow this to happen, and nobody in America should tolerate it either. Stop celebrating obesity and go back to giving me hot women in tiny bikinis. Is that too much to ask? – DailyCaller

Has he got a point?

Remember when we pushed magazines to STOP having ‘Heroin Chic’ models who looked something like this? 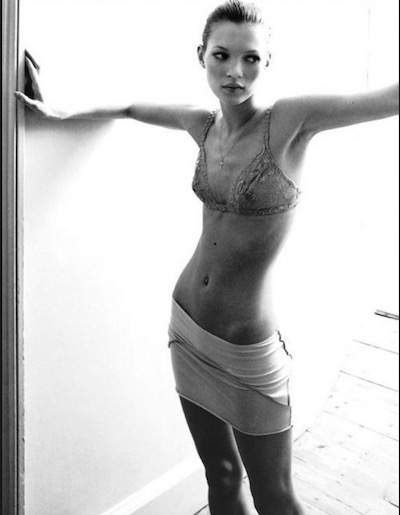 Wasn’t it because we didn’t want to promote unhealthy body standards for women?

And didn’t Michelle Obama spend her time lecturing us about healthy eating, and meddling in school lunches?

How do we square that with ‘celebrating’ obesity? Isn’t obesity a critical predictor for some of society’s most lethal and preventable illnesses?

Is it ‘hurtful’ to speak so plainly? What do YOU Think of plus size models?

What do you think of 'Plus-Sized' models?