The former FLOTUS is talking racism again. She says it’s why we didn’t like her. Is she right?

Or is it just that she’s an authoritarian harpy constantly telling us what to do and how to do it — like her disastrous School Lunch Program?

If we don’t agree then we’re called racists.

Could that be it?

Just like her husband, she just has this racism default switch.

Saying that she shouldn’t have said that there is ‘no hope’ now that her husband isn’t President and Hillary didn’t win?

Criticism of her racist and shockingly bad Princeton Thesis?

Perhaps shouting racism all the time is telling… 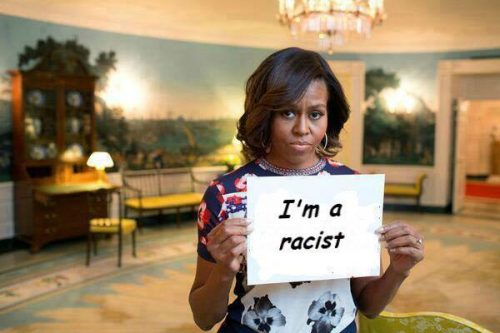 (Looks like somebody fixed that ‘Bring Back Our Girls’ photo.)

As ClashDaily previously reported, Michelle has taken a break from the constant vacationing to give a speech to women about — what else — racism.

Her message to women was ‘Seize your power and don’t let go’.

Or a ‘RACIST!’ might take it from you was implied.

“The shards that cut me the deepest were the ones that intended to cut,” she said, referencing being called an ape and people talking about her bottom. “Knowing that after eight years of working really hard for this country, there are still people who won’t see me for what I am because of my skin color.”

She said she can’t pretend like it doesn’t hurt because that lets those who do the hurting off the hook.

“Women, we endure those cuts in so many ways that we don’t even notice we’re cut,” she said. “We are living with small tiny cuts, and we are bleeding every single day. And we’re still getting up.”

First things first: The less we talk about Michelle Obama’s butt the better.

Second, anyone picking on her because of her race is just wrong. We should be beyond that.

But that doesn’t let Michelle off the hook for her ideas.

Because we see her for exactly who she is.

Progressivism makes about as much sense as Rachel’s Trifle on Friends.

You take a bit of feminism, sprinkle on some LGBTQQIP2SAA (and sometimes Y, why? Because, ‘Yes, we can!’), throw in some intersectionality, and mix with a bit of Socialism.

She criticized a one-size-fits-all education system that values speed of learning, pushing out women who learn differently than men from STEM fields.
Source: The Denver Post

This poses several questions that I have for Michelle and her Progressive buddies:

1. Aren’t feminists always telling us that men and women are exactly the same and that there’s nothing that a man can do that a woman can’t do? Or are there actual gender differences?

2. Did you just assume their gender? You asked each and every person in the education system their personal pronouns and determined how they learn best, right? Because ‘Gender is a social construct’, like the intersectionalists claim?

3. What about boys and higher education? We’ve adjusted the educational system to favor girls so much that the majority of graduates from institutions of higher learning are now women. Does the education system fail boys? Isn’t that a ‘Gender Gap’?

4. Should we change the way that STEM studies are taught to favor girls because ‘it’s time’ or are girls simply choosing to not take STEM subjects because of their interests? Perhaps we shouldn’t be applauding the vast majority of girls majoring in Sociology or Gender Studies.

5. Does this mean that you now support Betsy DeVos and school vouchers? Because ‘one-size-fits-all’ in education doesn’t work?

Oh, so many questions.

And lest we forget, Mrs. Obama has certainly used her race to her advantage.

She went to Princeton, after all.

And ranted about racism there, too. It was the subject of her freaking thesis.

You know what, Michelle?

It’s not that you’re black that we don’t like you.

It’s that you’re a Progressive.

The fact that you keep playing the race card doesn’t help. 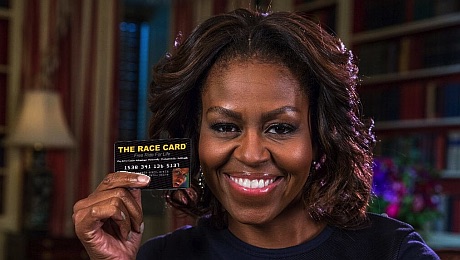 But then, that is the Obama way of dealing with critics, isn’t it?