In a plot twist that even Stevie Wonder could see coming…

When President Trump called these guys ‘Losers’, he may have been too kind.

These cowards are dolled up so ugly that they should be throwing themselves off of tall buildings.

Whatever happened to their code of ‘death before dishonor’?

Sorry. That may be unclear. We’re talking about ISIS here, not ‘Palestine’.

A Jihadist attempted to flee Mosul in a disguise similar to a pantomime dame, but was caught when he forgot to shave off his beard and moustache.
The ISIS fighter was trying to get away from the former militant stronghold as the city was recaptured, but didn’t quite get his escape plan right.
Dressed in women’s clothes and with elaborate make-up, the bearded man forgot to get rid of his facial hair.
In photos released by the Iraqi army after his capture, the man can be seen to have slathered on powder, eyeshadow and lipstick, even adding some beauty spots.
But the large moustache and beard as well as full eyebrows, rather give the game away.
Other photos released by the army show the men in padded bras as they try to slip through the net and out of the city. — DailyMail 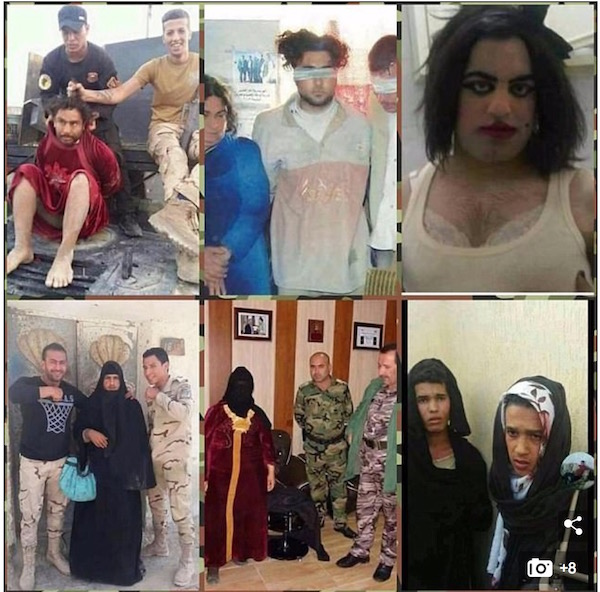 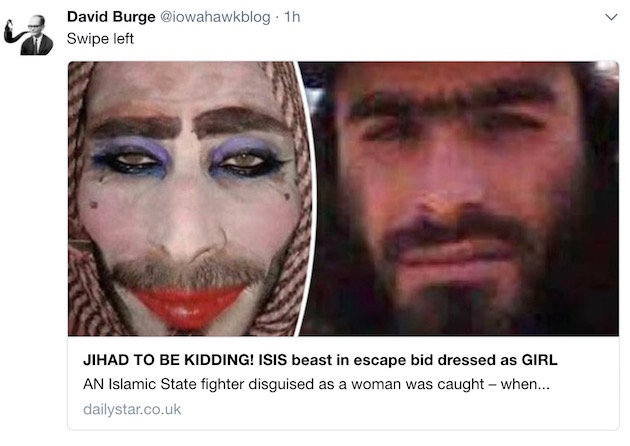 We’ve heard reports that Saddam Hussein had his favorite movies (one site claims ‘Enemy Of The State’), as did other dictators.

Is it possible that ISIS had Western Influences too?

It’s hardly the first time Jihadis have used Burkas to hide their identity when fleeing. It was part of the reason a Burka ban was upheld in European courts.

It prompted the question of whether we should ban them here, too. (That poll is still open.)

These guys are even more messed up than regular jihadis. The deprogramming (if they live long enough to begin it) will be … complicated.

They’ll want to add this to whatever resources they normally use.