Katy Perry has been a staunch advocate of leftist dogma. How will she feel about this church sign? She’ll HATE it.

In March of this year, she was accepting a ‘human rights’ award for her advocacy for the LGBTQQIP2SAA community and made some confessions.

“I’m just a singer-songwriter, honestly. I speak my truths and I paint my fantasies into these little bite-size pop songs. For instance, I kissed a girl and I liked it. Truth be told, I did more than that.

“How was I going to reconcile that with a gospel-singing girl raised in youth groups that were pro-conversion camps?

“What I did know is that I was curious and even then I knew sexuality wasn’t as black and white as this dress.”

After admitting that she hasn’t ”always gotten it right”, Katy added: “Most of my unconscious adolescence, I prayed the gay away at my Jesus camps.

“But then in the middle of it all, in a twist of events, I found my gift and my gift introduced me to people outside of my bubble. My bubble started to burst.”
Source: Huffington Post

Not so fast with that popping bubble… 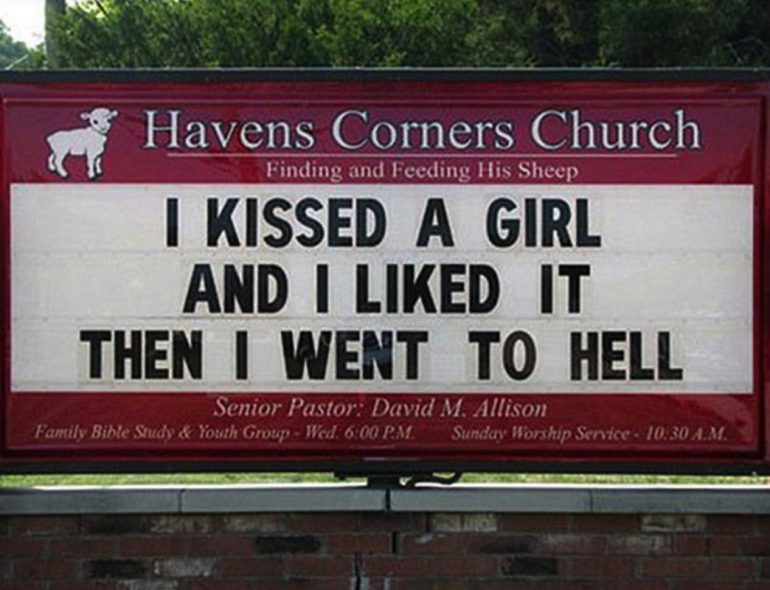 Biblical truths are under attack.

It’s sad that Katy, who was raised in a God-fearing home has turned so far away from the truth of the Gospel.

Katy’s mother, Mary Hudson, hasn’t given up hope for her daughter.

Because she knows the cost if she does.

We need to raise our children right despite all of the obstacles that the world throws at us.

And we might be labeled bigots in the process.

Listen to this and be encouraged: