Oh look — now that he’s a dad, Clooney is slowly becoming a Conservative. It’s like he finally ‘gets it’.

We’re just saying that he’s talking and thinking more in the same terms that WE think and talk in.

Having a family means we prioritize our own family’s well-being. And his dad instincts have kicked in.

We want to provide for our kids. We want them kept safe. We take an aggressive stance against anything we consider a threat to those things.

And now — between moving back to America (and his hilarious reasons for doing so) and his latest blow up about people invading his privacy, he is speaking the same language at the PERSONAL level that we have been speaking at the NATIONAL level.

Clooney is starting to look like he took the red pill.

There’s a photo of his kids on the cover of a French Magzine ‘Voici’.

Clooney objects to how the magazine got that photo.

Someone scaled his fence. Climbed a tree. And photographed the infant twins as they were inside their home.

“Over the last week photographers from Voici magazine scaled our fence, climbed our tree and illegally took pictures of our infants inside our home,” George Clooney said in a statement. “Make no mistake the photographers, the agency and the magazine will be prosecuted to the full extent of the law. The safety of our children demands it.” —Hollywood Reporter

The images published in Voici this Friday are a response to a public demand. People love George Clooney and have been following his life story for years. Those pictures do not put in danger Mr Clooney, his wife, or their kids.

The magazine basically took the ‘open borders’ and ‘no photographer is illegal’ approach in their argument. They also took the Clooneys are ‘community property’ argument.

Do you notice that these PRECISELY parallel the Democrat open-borders argument? 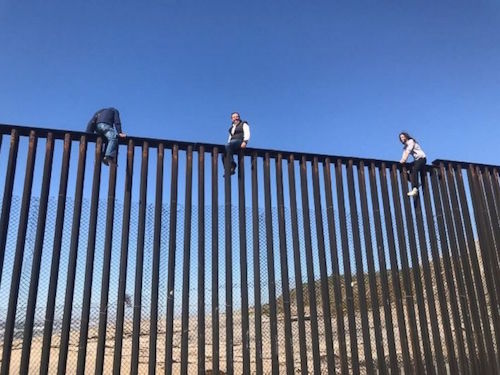 On the other hand, Clooney is making his case based on a Fence. An outsider illegally entered. Violated the security and privacy of the lawful occupants. And the photographer took something of value without permission.

All you have to do is figure out that you are being inconsistent.

What you are demanding for yourself, and the safety of YOUR family is the same thing that people who don’t have your wealth and resources want for THEIR family’s safety and security.

If he reads this book it might be the nudge he needs to ‘connect the dots’.