Anderson Cooper and Don Lemon might want to keep their resumes handy, just in case. Because these numbers are embarrassing.

CNN’s is in a world of hurt right now. They’ve slipped down to 13th spot in the ratings.

Their war with Trump has hurt them. (Badly.) Especially since Comey took all the wind out of their sails. And they had to retract a fake Russia story, which included the ‘resignations’ of three people. The Project Veritas undercover videos have cost them, too.

But they made the critical error of creating a P.R. S**t-Storm that has even gotten left-wing allies like BUZZFEED to stand up in opposition of CNN.

They got offended by Trump’s now-infamous wrestling tweet and made the mistake of ‘punching down’ against the Redditor who (may or may not) have been the actual originator.

The call is out on the right — take down CNN by any memes necessary.

For your amusement watch the demise of CNN through memes:
https://www.youtube.com/watch?v=mLGohKW21tI

What is the result? 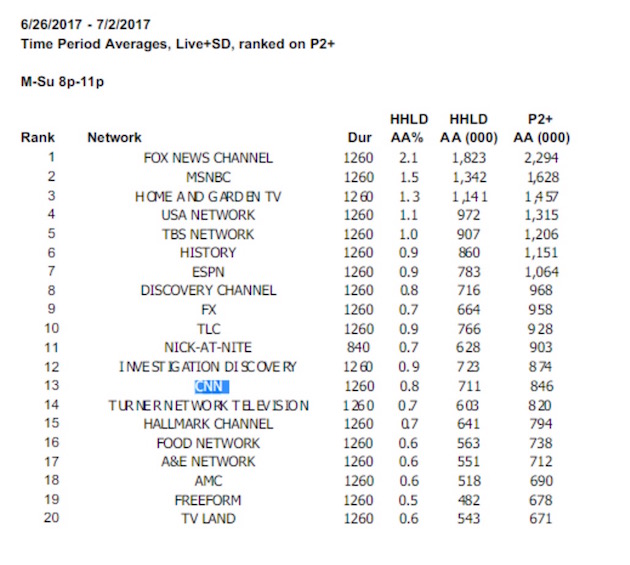 The result is that CNN is trailing in ratings to Nick at Night.

Last week, more Americans tuned in to watch re-runs of “Yogi Bear,” “Full House,” and “Friends” on Nick At Nite than to watch Anderson Cooper and Don Lemon’s shows on CNN.

According to cable ratings from the week of June 26-July 2, CNN’s viewership of its primetime shows was ranked significantly lower than its competitors like Fox News and MSNBC, which place first and second respectively. Clocking in at No. 10 on the list, CNN fell behind HGTV, Nick At Nite, History Channel, and ESPN — the sports network that’s been hemorrhaging viewers for months.

Their brand is fading, even their apps are now tanking. In the Apple store, they were rated one-star at last check!

Do you know what would REALLY hurt them? If TV consumers could have an ‘opt-out’ option in TV packages, so they could not receive channels they don’t want from a package, so that CNN wouldn’t get that automatic income.

Maybe it’s time consumers insisted on it. They’ve taken the public — and our goodwill — for granted for too long. The free ride is over.