Come to think of it, there’s a lot that this Pope hasn’t bothered to denounce.

What about fellow-Globalist, George Soros, who may have ‘singlehandedly created the refugee crisis’? Will Pope Francis denounce his mucking up of the world for his Socialist political ideology?

If the featured image for this article looks familiar, it’s a cropped version of this one: 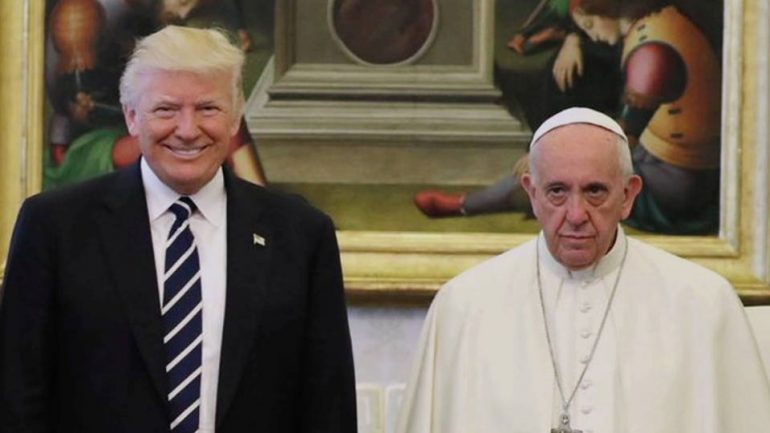 Doesn’t Pope Francis seem just so filled with joy to meet the President of the United States?

The nation that has been known as the ‘Shining city on a hill’ since it’s foundation?

But what does concern this Pope?

Pope Francis warned world leaders at the G20 summit against forming ‘dangerous alliances’ that could harm migrants and the poor.

Francis said, ‘I worry about very dangerous alliances among powers that have a distorted vision of the world: America and Russia, China and North Korea, Putin and Assad in the war in Syria’ in an interview with the Italian newspaper La Repubblica.

He added that the summit in Hamburg, Germany worried him, and advised Europe not to close its borders off to migrants.

Did he just lump America in with Russia, China, and North Korea?

And not a mention of Venezuela, eh?

On Friday, Francis reminded world leaders of the 30 million people trapped in conflict and famine, especially in Africa and Yemen.

He also called Europe the ‘richest continent in the whole world’ and urged it not to close off its borders.

European Union states are at odds over how to cope with a huge influx of migrants, many fleeing war and poverty in Syria, Afghanistan and other countries.
Source: Daily Mail

Does it really surprise you, though?

After all, he’s been a big defender of the ‘Religion of Peace’.

He even said in a 2016 press conference that anyone could be called ‘terrorists’. When asked about the way the Vatican speaks of terrorism, he told reporters that if he said ‘Islamic Terror’, he’d have to also discuss ‘Catholic Terror’.

I know it doesn’t make sense — it’s not like we have lots of Catholics mowing people down with cars, pulling out knives and getting all stabby, or blowing up preteen girls at Ariana Grande concerts.

We haven’t even touched on Sweden, Germany, France, Belgium, etc. (Pretty much any Western European country.)

No, this Pope doesn’t see the influx of (mainly) Islamic refugees a problem. Despite the violence, the rape, the terror, he doesn’t want to be judgey.

Unless it’s against the President of the United States and America in general.

Then, by all means — go ahead and be judgey.

Don’t worry about that plank in your own eye, Pope Francis, it’s probably nothing.

(The organized pedophile rings, on the other hand might be a delicate subject.)