President Trump is draining the swamp! He just ditched 500 employees from this agency and that’s just the beginning…

There was one particular agency that President Trump called ‘probably the most incompetently run agency in the United States‘.

President Trump has just fired 500 employees of the Department of Veteran’s Affairs, suspended 200 more, and 33 were demoted according to the Daily Caller.

VA Secretary David Shulkin has committed to greater transparency for the agency that is supposed to care for the needs of our veterans. But this isn’t the Obama-era ‘transparency’, Secretary Shulkin has stated that the agency will post employee firings and update it weekly. Shulkin was an Obama appointee that grew increasingly frustrated with the American Federation of Government Employees union that worked with Democrats to defend the bad behavior of VA employees.

And the behavior was very bad indeed.

Those disciplined include 22 senior leaders, more than 70 nurses, 14 police officers, and 25 physicians.

Also disciplined were a program analyst dealing with the Government Accountability Office, which audits the department, a public affairs specialist, a chief of police and a chief of surgery.

Many housekeeping aides and food service workers — lower-level jobs in which the department has employed felons and convicted sex offenders — were also fired.

Many veterans have died waiting for care while VA beaurocrats have falsified information to gain monetary bonuses.

This is the very issue that many opposing government-run health care are concerned about — and what occurs in many nations with socialized medicine. (See the ClashDaily article on Charlie Gard.)

Beaurocrats can behave without the best interests of the patient in mind, and unionized government employees are very difficult to discipline or terminate. At least when the Left is in charge.

But there’s a new sheriff in town, and he’s got Drano and a plunger. 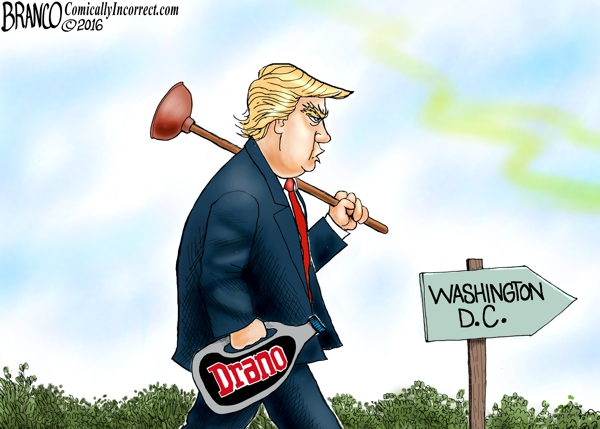 Shulkin expresses his frustration with what became the status quo:

“Just last week we were forced to take back an employee after they were convicted no more than three times for DWI and had served a 60 day jail sentence … Our accountability processes are clearly broken,” Shulkin said at the White House.

In addition to reluctance by managers to vigorously pursue firings, the overturning of firings after the fact by the Merit Systems Protection Board (MSPB) — often with little public acknowledgment — has been a longstanding problem.

Shulkin asked for new legislation that reduces the role of MSPB, especially when firing senior leaders. Congress passed the Department of Veterans Affairs Accountability and Whistleblower Protection Act in answer, and Trump signed the bill in June.

Contrast the 500 firings, 200 suspensions and 33 demotions to the Obama administration’s philosophy of bad employee behavior at the VA:

During the Obama administration, [former VA Secretary Bob] McDonald lamented that in the private sector “you cut a deal with the employee and you’re able to buy them out,” but said you cannot do that in government.

Yet VA repeatedly made five and six-figure payments to bad employees to get them to quit after they threatened to gum up the works by appealing disciplinary actions….

…The agency paid more than $5 million in settlements to employees under McDonald, which had the effect of encouraging bad employees to relentlessly appeal and make unsupported charges of discrimination when they were targeted for discipline, in an often-successful attempt to convert punishment into reward.
Source: Daily Caller

VA Secretary Shulkin said that he ‘will look to settle with employees only when they clearly have been wronged … and not as a matter of ordinary business.‘ A practice that seems to have been the default of the Obama administration.

This is a great start to getting our veterans the best care that we can.

President Trump is committed to our military and our veterans.

What a nice change!