How messed up is this? Are they even giving these parents a fair fight? Isn’t this a conflict of interest?

Charlie Gard’s parents, Chris Gard and Connie Yates are expressing concern that the lawyer that has been assigned to them to represent Charlie’s interests in court is the chair of a charity called ‘Compassion in Dying’.

Are you freaking kidding me?

What, was ‘Planned Parenthood’ unavailable?

Victoria Butler-Cole, who speaks on Charlie’s behalf in court, is chairman of Compassion in Dying, a sister organisation to Dignity in Dying which campaigns for a change in the law to make assisted dying legal in the UK. Dignity in Dying used to be called the Voluntary Euthanasia Society.

The two charities share the same chief executive and media team and trustees – such as Mrs Butler-Cole – can only sit on one charity if they support the aims of the other. Mrs Butler-Cole was appointed to the role by the publicly-funded state body Cafcass which acts in the best interests of children in court cases.

This is a fantastic reminder why we did.

We wanted Liberty, not Tyranny.

This is the intrusion of the state that socialists like Bernie are giddy for.

Yeah, let’s examine that for a sec.

The Machiavellian overtones of this whole case are so unbelievably disturbing.

First, the National Health Service in Britain via the Great Ormond Street Hospital had already decided that they would make the decision on life or death for Charlie.  They chose death.

When his parents fought it, it went through the courts.  In April, the High Court determined that Charlie should ‘die with dignity’.  The Gards appealed.  The Appeals Court sided with the Hospital.  It went all the way to the European Court of Human Rights, and they also decided against the parents of the child.

That alone is chilling.

These people, the ones that care for him day after day — that have loved him from before he was born — just want to give him a chance at life.

These parents who want an opportunity to attempt to treat their son.

They even raised the money for treatment themselves — $1.6 million U.S. to pay for experimental treatment in the U.S.

The (Not So) Great Ormond Street Hospital fought them on removing their child from their facility.  The Gards fought back and gained media attention for the plight of Charlie.

The used-to-always-be-Pro-Life Vatican even weighed in and told them that they should know when to ‘let go’.

The  medical experts told the Gards that they weren’t even permitted to take him home to die in his crib as they chose, nor would they wait for the extended family to travel to see Charlie before they pulled the plug.

The Pope eventually got around to making a plea for Charlie’s life.

But the kicker was when President Trump tweeted that he’d be willing to help.

The case was brought before the courts again, and the court agreed to hear Charlie’s parents make their ‘best plea’ for his life.  They cited a doctor in the U.S. that had an experimental treatment that has an 11 to 56 percent chance of improvement for Charlie.

(Is it here that I mention that the Hospital and the National Health Service — Government-funded health care system — has been fighting this family for months?  And his prognosis may have been better had he received the treatment earlier?)

The courts have ‘permitted’, — yes, they magnanimously ‘allowed’ — a second opinion before they snuff out the life of this child.  Oh, sorry.  Allow him to ‘die with dignity’.

These people are such heartless bastards that they didn’t even want Charlie’s parents to sit in on the meeting with the panel of doctors that were going to decide their child’s fate.

A spokesperson for the Gards has said that Charlie is essentially a ‘prisoner of the state’.

His own parents can’t take him for treatment or a second opinion — even if they pay for it themselves — without battling for it in the courts.

How did we get to 2017 where parents seem to have no rights at all?

You can thank the United Nations for that.

But now, there is a court appointed guardian that will represent Charlie in court.  Not his parents.

And, as usual, the deck seems stacked against Charlie.

Connie Yates and Chris Gard, from Bedfont, in west London, believe they, as his parents, should speak for Charlie in court hearings that are deciding his fate. They don’t believe their son should have a guardian representing him in court.

Charlie suffers from a rare genetic condition that has left him severely disabled and suffering brain damage.

Great Ormond Street Hospital is seeking to switch off his life support machine and has been backed in court by Charlie’s state-appointed guardian, represented by Mrs Butler-Cole.

Of course, Mrs. Butler-Cole can’t discuss anything because it’s the middle of the court case.
A spokesman for the charity did make a statement:

Compassion in Dying said it was wrong to suggest there was any conflict of interest between Mrs Butler-Cole’s role in representing Charlie’s guardian in court and her view that adults with full mental capacity should be allowed to plan their own death.

A charity spokesman said: “There are clear differences between this case, the work of Dignity in Dying and the work of Compassion in Dying. The Charlie Gard case is about making decisions in the best interests of a seriously ill child.”
Source: The Telegraph UK

Talk about lack of self-awareness.

Of course it’s a conflict of interest!

Many of the arguments for the ‘dying with dignity’ movement is ‘quality of life’.

What about the sanctity of life?

Isn’t life valuable because it is life?

How do you determine ‘quality of life’?

Whose standard do you use?

Like many on the right, I believe the pro-abortion and euthanasia movements have diminished the regard for the sanctity of life and instead replaced it with the very subjective determination of ‘quality of life’.

Isn’t it funny that there is so much ‘choice’ around death, but not the same kind of ‘choice’ when it comes to life? Especially if the life is deemed sub-standard somehow?

The Gards are attentive, loving parents that continue to care for their son daily.

This case has garnered such attention because it raises so many difficult issues.

There is a child who has limited if any prognosis for improvement and will ultimately need care for the rest of his life.

It has been reported that Charlie is not in any pain, and is not suffering.

The Gards have contended with the assertions that Charlie ‘doesn’t open his eyes’. (You can see from these photos that he does.)

There are loving parents that are willing to do anything for their child.

The medical experts are telling them that there is no hope.

When the parents found a glimmer of hope, the experts used the courts to stomp out that spark.

There is also a National health care system in place that pays the bills.

Both Charlie’s parents and the medical experts claim that they have Charlie’s best interests in mind.

But who ultimately decides? 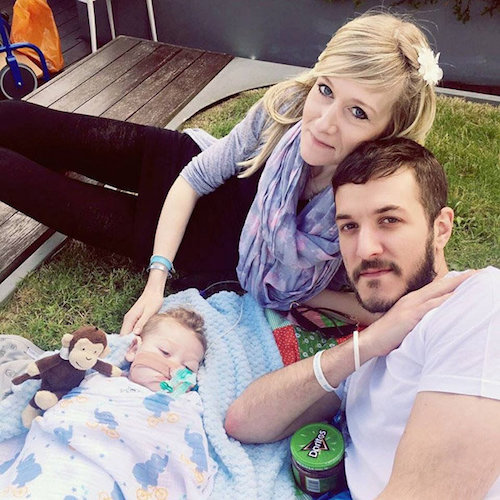 The pro-euthanasia lawyer that has been assigned by the state as Charlie’s ‘guardian’ and advocate in court?

Who gets to ‘play God’ in this situation?

I submit it’s the ones fighting for his life.

After all, they’re the ones that gave Charlie life in the first place.

You know where I stand.

Watch Connie and Chris interviewed and tell me what you think in the comments.

The final decision on Charlie’s fate is expected on Tuesday, July 18.