How long will it be before we can be honest enough to address the real problem here?

The British are calling them ‘Asian’. That is what is called a half-truth. A half-truth is also called a ‘convenient lie’.

‘Asian’ men are being busted in a ‘massive child sex ring’.

Here are the ‘Asian’ men: 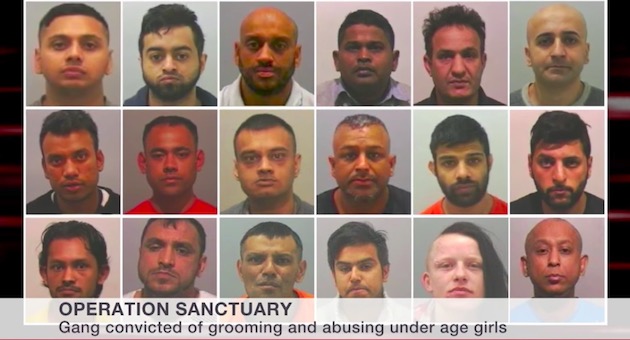 In a shocking case reminiscent of the Rotherham child sex abuse ring, British police say they have made 461 arrests and have identified at least 278 victims of a massive sex, prostitution, and drug ring. Of those arrested, authorities have tried 26 defendants. The BBC reports that most of those convicted so far of serious charges are “Asian,” the British term for those from the Middle East, Pakistan and India. —DailyWire

Asian. How convenient that they are grouping them by RACE and COUNTRY of origin rather than shared religion or values.

Here is the half-truth: Asian IS the correct word to ethnically describe people from that part of the world. They are using the ETHNIC term as a convenient dodge to avoid talking about what actually unifies them: their shared VALUES.

The court heard that one of the men convicted, 37-year-old Badrul Hussain, was heard telling a ticket collector on the Tyne and Wear Metro: “All white women are good for one thing, for men like me to f*** and use as trash, that is all women like you are worth.” —DailyWire

The above is not an ‘ethnic’ statement so much as a ‘values’ statement.

Was there any reference to what the members in this group might have in common? Anything like, say, a common ideology, or religion?

We only ask because the media (peace be upon them) are super-careful never to mention the particular ideological (or even religious) leanings of certain immigrants. It’s not politically correct to even to bring it up, even though there has been a SPIKE in recent years of sex crimes.

The enormous scale of modern slavery and human trafficking in the UK has been revealed in a major official report, with hundreds [of] cases affecting “every large town and city in the country”.

The National Crime Agency (NCA) said the scale of the issue is far more prevalent than previously estimated, and warned that the threat is continuing to expand.

…The number of people being referred into the National Referral Mechanism (NRM) – the UK’s official framework for identifying victims of human trafficking – has been steadily rising in recent years. Almost 1,400 victims, including cases of sexual exploitation and domestic servitude, were identified last year. —Independent

When people try to report on them, and whether they happen to have names like Mohammed — because some religions (well one, really) still endorses enslaving people — the reporters get hauled off to jail in the middle of the night.

Let us say this again. In a Western nation, that claims to believe in a free press, a reporter was arrested, from his home. In the dead of night. Because he dared to report on the public trial of a Muslim rape gang… and actually CALLED it a ‘Muslim’ rape gang.

Was he ‘out of line’ to make such a claim?

Maybe THIS German invention is a clue:

Germany has invented “anti-rape undergarments” to make it harder for the "Religion of Peace" "Refugees" to rape women. pic.twitter.com/8FPQnJ3qJ4

By definition, problems we refuse to properly define cannot be properly solved. How long will it be before we’re willing to look the real problem in the eye?