Oh, you just KNOW this is going to backfire, Bigly!

Chelsea took it upon herself to comment on disputed claims that Trump called the White House a ‘dump’.

This is a Clinton attempt at ‘taking the high road’. The rest of us call it ‘passive aggression’: 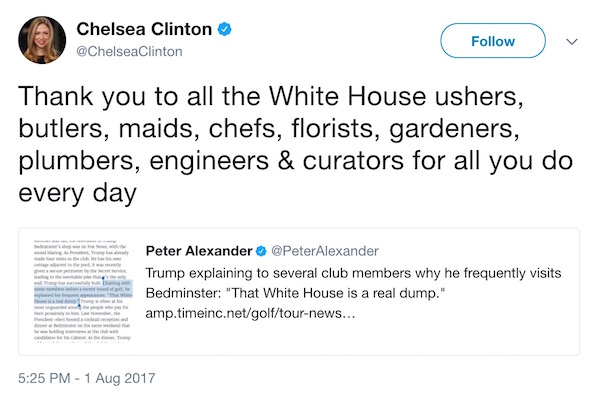 Has she never heard the term ‘glass houses’? 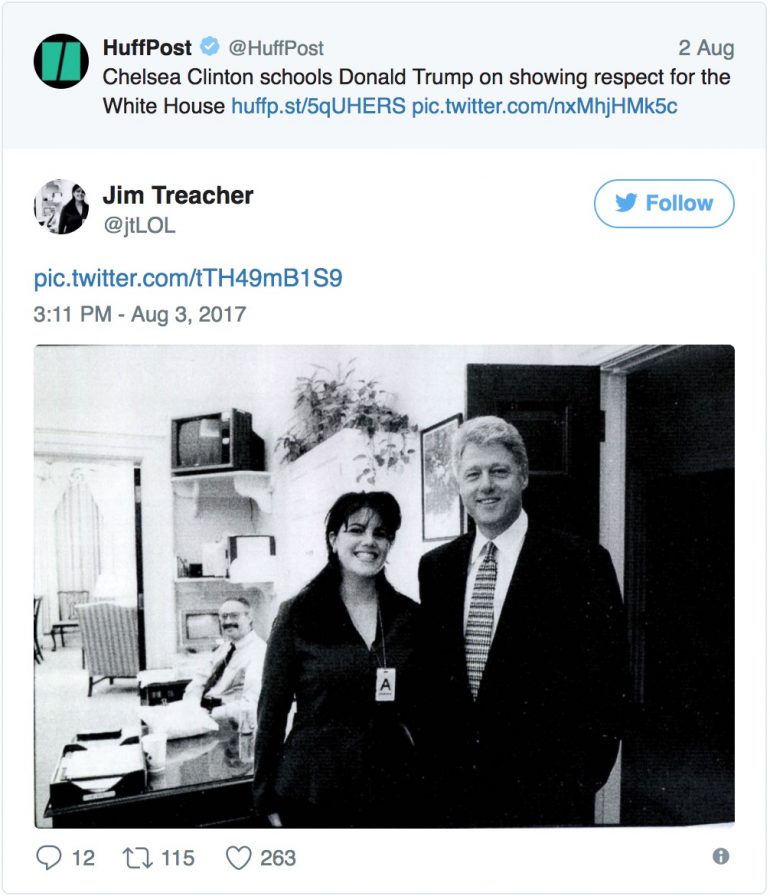 Oops. Has she forgotten about the ‘Blue Dress’, or that Bill used an intern as a humidor?

That’s not the only problem with her little comment, is it?

Oh, honey — even the New York Times doesn’t have your back on THIS one.

Let’s look a little deeper into that article:

The General Accounting Office, an investigative arm of Congress, said today that ”damage, theft, vandalism and pranks did occur in the White House complex” in the presidential transition from Bill Clinton to George W. Bush. The agency put the cost at $13,000 to $14,000, including $4,850 to replace computer keyboards, many with damaged or missing W keys.

Some of the damage, it said, was clearly intentional. Glue was smeared on desk drawers. Messages disparaging President Bush were left on signs and in telephone voice mail. A few of the messages used profane or obscene language.

So, Trump, she claims, spoke with less than regal respect to the White House.

”A Secret Service report documented the theft of a presidential seal that was 12 inches in diameter from the Eisenhower Executive Office Building,” next to the White House, on Jan. 19, 2001, the accounting office said.

Six White House employees told investigators that they had seen graffiti derogatory to Mr. Bush on the wall of a stall in a men’s room. Other White House employees saw a sticker in a filing cabinet that said, ”Jail to the thief,” implying that Mr. Bush had stolen the 2000 election. The report said all these employees were members of the current White House, but did not make clear whether any had also worked in the Clinton White House.

Some FBI reports about Hillary called into question whether furniture she took home from the State Department were hers to take, as well.

We haven’t even gotten to the war room and the ‘bimbo eruptons’.

With parents as greasy as HERS are, She’s better off shutting up. She might accidentally remind authorities about a scandal or two they haven’t already been shielded from.