What makes America special? The rights afforded to people here that they don’t have other places.

That includes the right to hold unpopular ideas, so long as they do not incite violence to others.

Even really obnoxious people like the KKK can do so.

So long as they are not whipping up an angry mob.

Like what ‘Antifa’ and other Hard-left violent groups have been known to do.

Yvette Felarca, the Berkeley area school teacher and militant left-wing protester responsible for organizing the riot at the University of California, Berkeley in February 2017, claims that violence against the far-right is “not a crime.”

Felarca, who belongs to “By Any Means Necessary,” a far-left group, is currently facing assault charges after she was caught on video assaulting a white supremacist during a July 2016 rally in Sacramento, Cali.

She’s in this video, as part of the mob hitting, pepper-spraying and kicking a guy who had not taken a single swing at anyone until after he was encircled. And then, he took only one swing to drive them back so he could fall back.

They chased him to the police line where they continued to hit him, right in front of the cops, and tried to drag him off.

The man they all attacked was unaffiliated with any group. He only showed up because he didn’t agree with affirmative action.

But everything he told the reporter(?) on the scene unfolded as predicted. He said the real fascists are the ones who will come at me in their balaclavas and start attacking me.

Right on cue… the mob charged him.

These groups make two seperate claims that everything hinges on.

First: they call everyone they disagree with a ‘nazi’. Trump supporters. Republicans. Independants who support free speech. Pretty much the ‘for us or against us’ mentality. Since they are the one upholding law and order, this will naturally be extended to the Police.

The use of ‘nazi’ is deliberate, and is a means to an end.

Second: Because ‘nazis’ are such a dangerous hateful group, anyone who is one (that’s pretty well everybody) is ‘fair game’ for violence.

THESE are the people that Trump meant when he said ‘all sides’. It’s who he meant by ‘alt-left’.

Their Europen counterparts have given us such ‘lovely’ pictures as these: 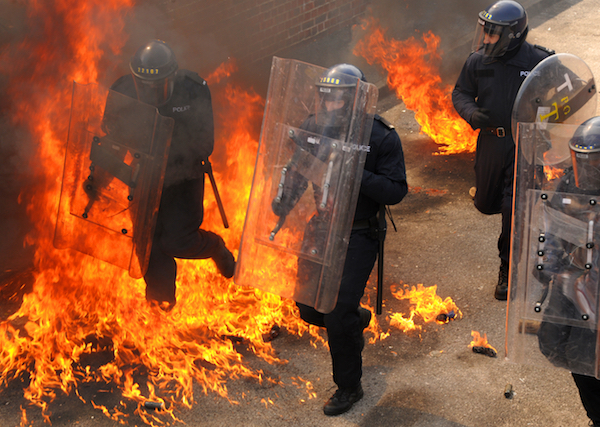 Here is Time giving the backstory for that Getty Image of cops on fire in Paris.

Is that what we REALLY want in America?

Some would say ‘yes’.

The Mayor of Berkley is in on this madness.

So are the Antifa Punks who were dropping quarter-sticks of dynamite into wine bottles… making makeshift grenades to cause injuries and mayhem. (Anonymously… of course.)

When will the Democrats FINALLY stand up and denounce these people?

Especially since they are cheering the deaths of cops…

And we had 6 Law Enforcement Officers shot (one killed) JUST LAST NIGHT.

Does anyone SERIOUSLY believe they are ‘fighting for justice’?