This should hurt their standing in the eyes of the Left, but it probably won’t.

Antifa poses as a grassroots movement (it’s not).

It pretends to concern itself with ‘justice’. (‘Negative’ on that score, too.)

What DO they concern themselves with?

Mostly, they fill bottles with piss and throw them at cops.

Or they find people who are planning to come together and pray — so they can beat them up.

Sometimes they set fires. (The European branch has even been shown setting Policemen on fire.) Or deface monuments.

Others will swarm and attack Journalists. This is ‘important’ to do for their cause. Because a free press is the enemy.

In an anonymous statement posted online titled “No face, no case: in defence of smashing corporate media cameras” the group said it wanted to “offer an explanation” for why a Global News camera was smashed and reporter Mike Armstrong was assaulted and pushed down a staircase.

They are REALLY, REALLY good at whipping up racial enmity, and infiltrating a leftist protest so they can turn it violent.

And remember that ‘iconic’ picture where the guy with a makeshift flamethrower and the guy with the Confederate Flag squared off? Watch the clip only moments before that photo was taken.

Despite the New Yorker waxing poetic, and calling the guy with fire a ‘picture of eloquence’, notice who is doing what when first they meet.’

The one group — who nobody in America particularly likes — was proceeding in line. They were climbing down the stairs and turning to their right. Suddenly a gap opened, and the line stopped. Do you see why?

‘Flamethrower man’ walked up to that line threatening the group with fire. The flagpole came down AFTER the physical threat of fire was present.

So even at the group’s ‘most righteous’ moment, coming into conflict with actual white supremacists, Antifa was the belligerent party.

Fast forward to Hurricane Harvey and the flooding in Texas.

If BLM and Antifa are supposedly the voice of Justice, helping the little people that ‘white devils’ are ‘refusing to help’ (because everyone and their dog are called Nazis these days) you would think that they would be front and center helping the needy.

But they’re nowhere to be seen. They aren’t REALLY concerned with social justice. At all. Because nobody is paying them to show up.

Most of them are probably hired mercenaries. Protesting and thuggery are like Summer jobs.

There is no money to be made in helping the needy. No protester budget for that.

What’s the point of helping the needy? After all, there is no way to leverage it into hate — because moments like this are when labels and races drop off.

Just like they do on a smaller scale when we stop seeing people as ‘the enemy’ and start seeing them as our neighbors. (Like this wonderful example in Florida. Watch: Eighty Strangers’ Amazing Act Of Heroism Will Restore Your Faith In Humanity)

These ‘protest’ groups are fed, organized, and whipped up by so-called charities. Including foreign funding.

They have even been filmed chanting THIS lovely slogan:

Is it any wonder they are not a presence in the rescue efforts?

Some people just want to watch the world burn.

The harmony and cooperation that emergencies bring out between rich, poor, black, white and otherwise doesn’t fit neatly in their little boxes.

They’re too busy calling everyone ‘Nazis’, and attacking such notable and dangerous ‘white supremacists’ as a Japanese man on his way to a Prayer meeting in Berkeley. And swarming photojournalists.

Contrast that against the veritable army of volunteers in their own little boats going from house to house and pulling strangers — with zero regard to race or politics — to safety. For free.

And one photo said it so succinctly: 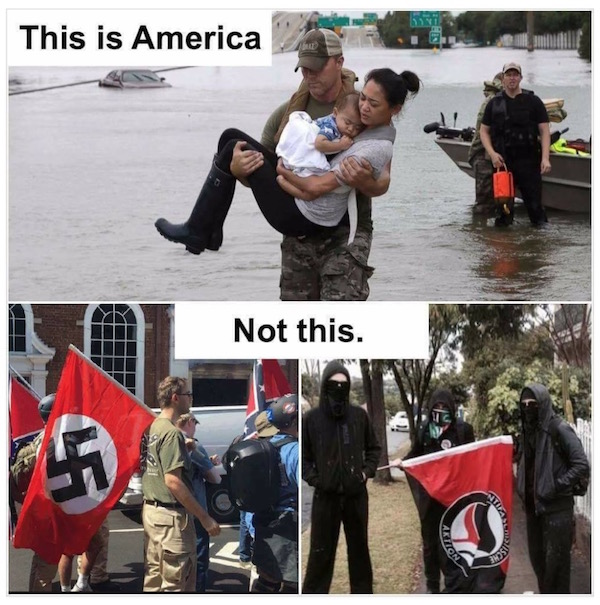