Some social media reports that Osteen’s church was closed to the public led to a firestorm.

*update*
7:50 AM PT — Pastor Osteen’s church is now open for evacuees, and he says flooding inside the church is the reason for the delay.
A Lakewood Church rep tells us, “Lakewood’s doors are open now to anyone needing shelter. We are also coordinating with the city as a collection site for distributing supplies to area shelters. We are collecting diapers, baby formula, baby food and other supplies. Please bring these items to Lakewood Church, Circle Drive off Timmons St.”
The rep also sent us photos of “initial flooding” within the church, and says this is “why we couldn’t open initially.” — TMZ

And while people on both sides of social media was calling for SOMEBODY’s heads to roll (depending on their starting point), the Christian satire site ‘Babylon Bee’ had a little fun with the whole controversy. 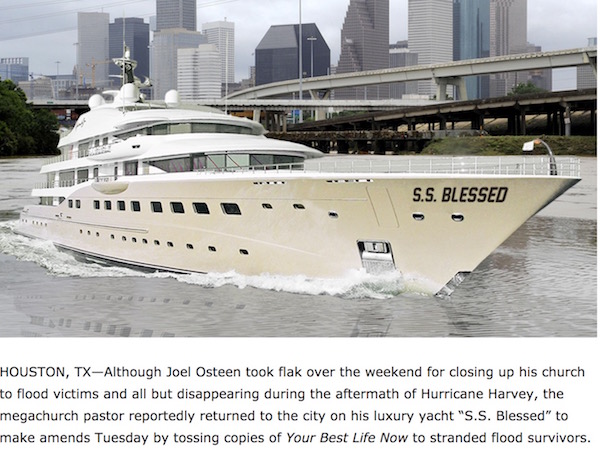 Here are the criticisms, and their response. Decide for yourself.

Televangelist Joel Osteen canceled services at his Houston megachurch Sunday and has yet to reopen its doors — despite the fact that thousands of flooded-out residents are desperately seeking shelter.

The perpetually smiling pastor told followers on Twitter on Monday to lean on their faith.

But Osteen’s comforting words didn’t sit well with critics, who want to know why the doors to his 16,800-seat arena at his Lakewood Church near downtown Houston are closed.

“You have taken so much money away from your people to live like a king,” entertainment publicist Danny Deraney blasted. “It’s the least you could do.”

Osteen put out a series of tweets showing his support, concern, and prayers for the people of Houston.

Osteen is asking for donations. 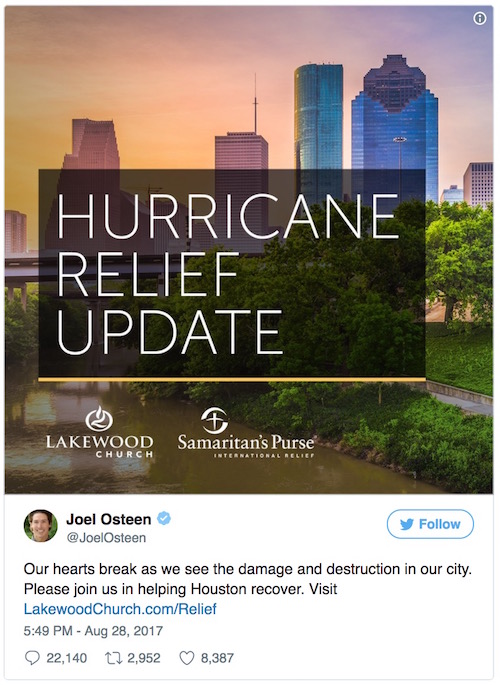 I’ll be he wishes that he didn’t write this one:

While the church and its arena have not suffered any flood damage yet, ministry spokesman Donald Iloff said their property is inaccessible because of surrounding waters.
Source: New York Post

But other churches are opening their doors:

In the wake of this natural disaster dozens of Houston-area churches, schools and community centers have opened their doors to offer temporary shelter to survivors.

In the wake of this natural disaster dozens of Houston-area churches, schools and community centers have opened their doors to offer temporary shelter to survivors.

One Houston resident is calling B.S. on the claim that the church building is inaccessible Osteen for not opening up the doors:

Just offer shelter and a dry place for those who need you and want to know you care. .@JoelOsteen those who can't get here still need you! pic.twitter.com/MdHAHWGprR

Their reply was that they had internal flooding. 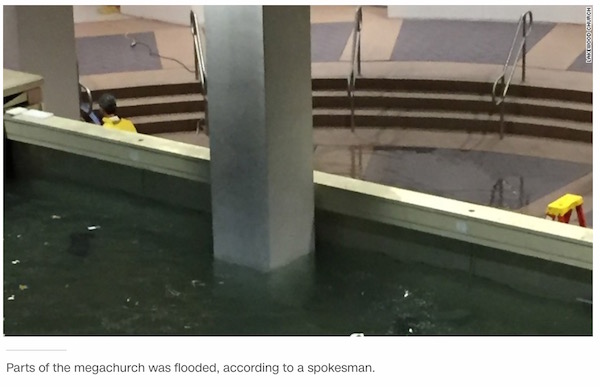 It is unclear to what degree, and whether that would leave other parts of the building unfit for use. 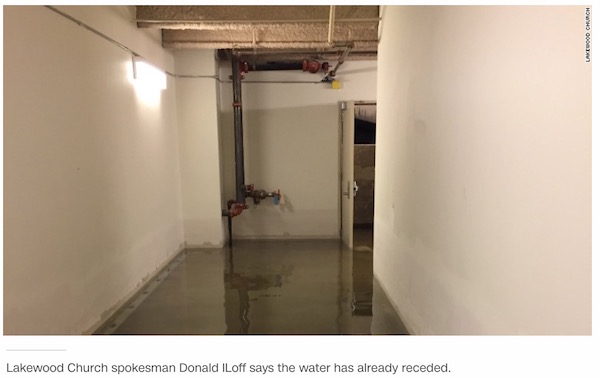 Here is the statement given by an official spokesman:

“It’s not our unwillingness, it’s just practicality. It’s been a safety issue for us,” Iloff said, adding that Harvey’s heavy rainfall almost spilled over Lakewood’s floodgate this past weekend. “Lakewood Church has a heart for this city.”

The church will be open Tuesday at noon to collect baby food, baby formula, baby diapers, and adult diapers on behalf of the city. Lakewood was in communication with the city today and said it would shelter Harvey victims once other shelters are full, Iloff said. —Chron

God provided a stadium as a shelter for ‘such a time as this’.

It would be nice if the public could use it.