Leftist activists won’t be able to hide behind masks now.

In an effort to deal with the rise of the violence on the radical left, the Trump Department of Justice has issued a warrant to Dreamhost, a website service provider to hand over 1.3 million IP addresses connected to the DisruptJ20 website — a site that was central in organizing anti-Trump riots on Inauguration Day.

It’s controversial, and some on the right are concerned about privacy rights of individuals.

According to The Wrap, Dreamhost is refusing.

The DOJ is looking for Dreamhost to share information from visitors to disruptj20.org — a site that has organized protests against Donald Trump, including his presidential inauguration. In its search warrant, the DOJ calls for Dreamhost to provide emails connected to the site, as well as subscriber information and “names, physical addresses, telephone numbers, and other identifiers.”

The website posted on their blog that they are working with authorites, but ultimately fighting for their users.

DreamHost, like many online service providers, is approached by law enforcement regularly to provide information about customers who may be the subject of criminal investigations. These types of requests are not uncommon; our legal department reviews and scrutinizes each request and, when necessary, rejects and challenges vague or faulty orders…

DreamHost also said that they believed that the warrant issued to identify so many users was government overreach and a violation of the First Amendment.

…The request from the DOJ demands that DreamHost hand over 1.3 million visitor IP addresses — in addition to contact information, email content, and photos of thousands of people — in an effort to determine who simply visited the website. (Our customer has also been notified of the pending warrant on the account.)

…As we do in all such cases where the improper collection of data is concerned, we challenged the Department of Justice on its warrant and attempted to quash its demands for this information through reason, logic, and legal process.

Haven’t the leftist that are asking for censorship always telling us that ‘hateful’ speech isn’t covered by the First Amendment?

And actually, ‘incitement’ isn’t covered — that’s against the law.

ClashDaily reported on DisruptJ20 before the Inauguration.

Here is the result:

The Atlantic’s September 2017 edition has an article called ‘The Rise of the Violent Left‘.

In the article, in the opening paragraphs it states that Leftists are looking for ‘Nazis’ and ‘fascists’ wearing red MAGA hats and carrying Trump flags because they ‘normalize support for an orange man who bragged about sexually harassing women and who is waging a war of hate, racism and prejudice.’

The leftist founder and publisher of The Daily Kos now part of Vox Media, Markos Moulitsas has tweeted out that Conservatives and Nazis are the same. 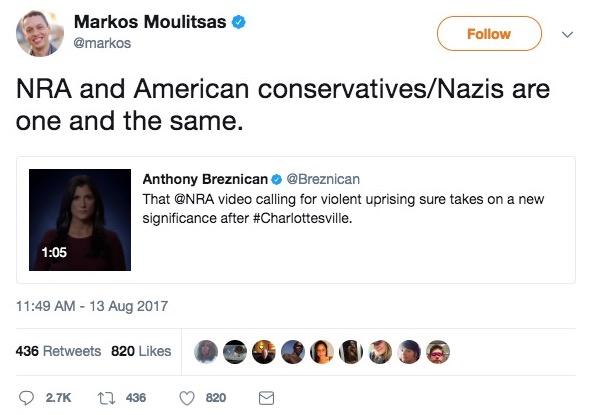 And there are calls to ‘Punch a Nazi’ from the left — that now means all Republicans according to Markos Moulitsas.

Watch as a masked Antifa dude hits a Trump supporter with a bike lock to the head (LANGUAGE WARNING):

These aren’t the ‘peaceful protesters’ that the Media (D) and others are claiming.

And they shouldn’t be able to hide behind masks.