This dude ‘revolutionized’ the school lunch program and he found a get-rich quick scheme, too.

David Binkle has been made famous for using produce and meats from local growers to make school lunches healthier for thousands of students in Los Angeles.

But it doesn’t stop there.

Looks like Binkle was siphoning money off the top of the Los Angeles Unified School District’s lunch program.

Prosecutors allege that Binkle illegally funneled roughly $65,000 of the district’s money into a private consulting firm he ran.

Someone connected with the Obamas using the taxpayer funds as their personal bank account?

The hell you say!

The Los Angeles Times reports that 55-year old Binkle pleaded not guilty to 15 felony counts including embezzlement and misappropriation of public funds. He could face up to 13 years in prison.

According to court documents, Binkle repeatedly misappropriated district funds in amounts ranging from $5,000 to $15,000 between 2010 and 2014. Prosecutors also allege that he forged an application to become a vendor with the district and failed to disclose outside financial interests.
Source: L.A. Times

The L.A. Times is downplaying the role that Binkle had with Michelle’s program, but Independent Journal Review clears that up. The inestimable Benny Johnson says that Binkle was an advisor to Michelle and proves it.

There’s photo evidence that they met in 2014: 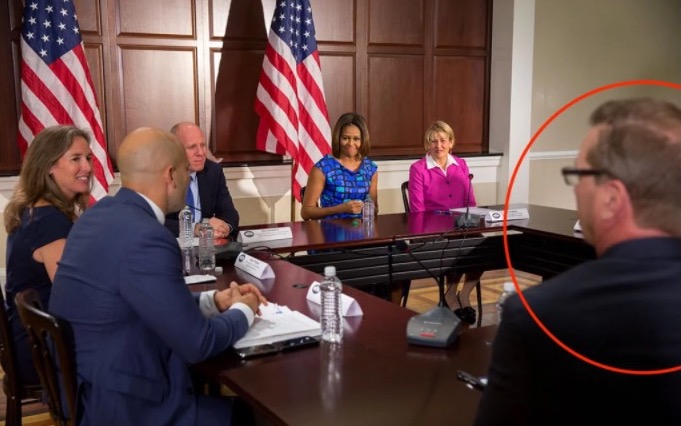 And Michelle praised him for his innovations:

David Binkle, Director of Food Services for Los Angeles Unified School District, shared that his district has been able to successfully implement and even go beyond the nutrition standards for the 650,000 students they serve. As a result, they have seen increased participation in the program, improvements in students’ academics, and even increased graduation rates.

Although, we’ve reported in the past that Michelle’s school lunch program may have is a perfect example of the term ‘Epic Fail’. It was gross when compared to what other countries did.
France may be going to hell in a handbasket, but they do provide a nice lunch!

Our buddy, and ClashDaily contributor, John Cardillo had a thought-provoking question:

Do the Obamas have any friends who aren't criminals?https://t.co/kVzTOglOx0

Benny Johnson suggests that Binkle’s next reform could be the overhaul of the food program in the prison system.